Advocate Of Negotiating With Bandits ‘Tukur Mamu’, Caught In The Web Of Intrigue 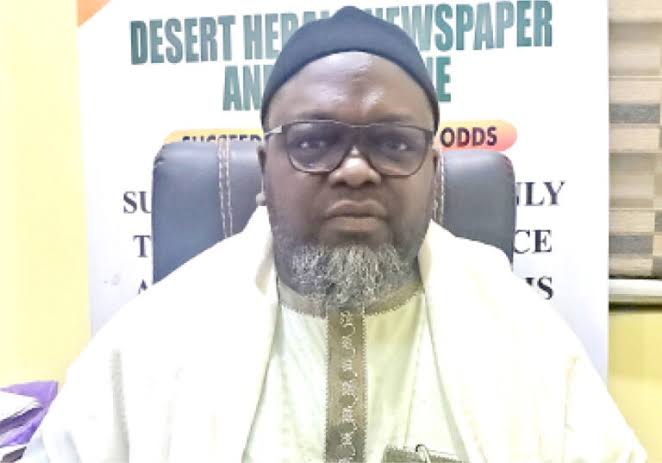 Kaduna-based publisher, Tukur Mamu, who has been an advocate of negotiating with bandits, may have forgotten that he is not untouchable.

Mamu who is the publisher of Desert Herald Newspaper, may have thought he is enjoying immunity over all darts from the seat of power. Some observers strongly believe that something must be working for him because of how he has been interfacing with bandits. He ferries bandits opinions and terms to families of victims.

Mamu, who also doubles as spokesperson of the Kaduna-based cleric, Sheikh Ahmad Gumi, was arrested during the week at the Aminu Kano International Airport, Kano, on his arrival from Egypt.

In the past months, he had been involved in the controversial negotiations that led to the release of several abducted passengers of the March 28 Abuja-Kaduna train attack, and this has infamously brought him to the limelight.

His troubles began while he was on his way to Saudi Arabia for lesser Hajj. He was travelling alongside his two wives; Fatima Bashir Mamu and Aisha Salisu Mamu as well as his eldest son, Faisal Tukur Mamu, and his brother-in-law Ibrahim Hassan Tinja.

Far more than just bystander, Mamu as a non-state actor was fast-becoming more successful than the security agencies in brokering deals to free hostages.

Hanging around the neck of the negotiator are many allegations – especially around the ransom paid to secure the release of the Abuja-Kaduna train passengers.

Last year, his principal was also in the eye of the storm when DSS quizzed him over remarks that some Nigerian soldiers might be aiding and abetting bandits.

Mamu had, several weeks ago, withdrawn as the lead negotiator in securing the release of the hostages of the Kaduna train abduction. He equally accused the federal government of threatening his life.

The DSS officers during the week, raided his residence, ransacked every nook and cranny of the house and reportedly carted away laptops, phones and documents.

Confirming the raid, the Spokesman for the DSS, Peter Afunanya, said: “So far, appropriate security agencies have executed valid search warrants on Mamu’s residence and office. During the processes, incriminating materials including military accoutrements were recovered.

“Other items include large amounts in different currencies and denominations as well as financial transaction instruments.”

The arrests have since extended to his father-in-law. But his company, Desert Herald, has since spoken out – warning the DSS against a media trial. Hopefully, the man would get his day in court.