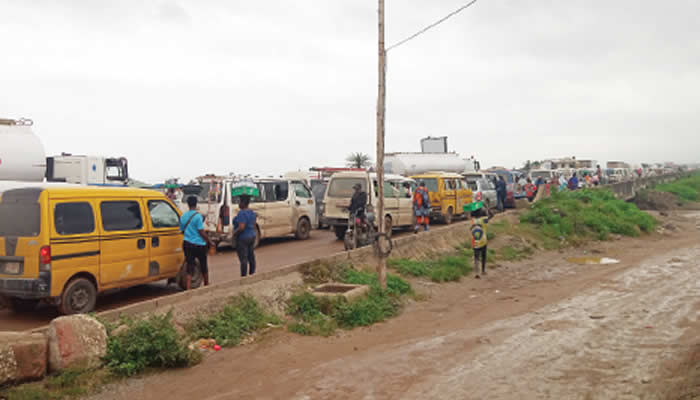 Travellers on the Lagos-Ibadan expressway on Monday experienced a traffic gridlock on the Magboro-Berger section of the road, with some lamenting that they spent almost 16 hours on the road.

PUNCH Metro had reported that the Berger construction company was conducting repairs on various parts of the road. However, traffic worsened on Monday.

A traveller, Oyinda Kazeem, regretted travelling, noting that she missed her appointment due to the traffic.

She said, “I had an appointment with a mentor I haven’t seen in a long time so I travelled from Ibadan. He is travelling overseas tomorrow. I don’t think I’ll see him.”

A worker in a private firm, John Adah, told our correspondent he had to pack his car by the roadside and take an okada to Lagos to meet an appointment.

He said, “I need to get these documents signed otherwise we will lose the contract. I don’t have a choice but to run. I’ll come back to the car.”

Another commuter, who simply identified herself as Ayomide, said her boss was beginning to doubt her commitment to work as he always resumed late to work due to the traffic.

Meanwhile, commercial vehicles and motorcycles hiked their fares by over 300%, charging about N1000 for a trip from Ibafo to Berger.

A snack seller, Umar Ibrahim, told our correspondent that he had made a month’s sales on Monday alone.

He said, “Market is good. I have been making sales for a month. My Oga will be happy and I will get a high compensation too.”

The supervisor of the Lagos-Sagamu section of the expressway, Wale Adebote, blamed the rain and vehicles that broke down along the expressway for the gridlock.

He said, “Three vehicles decided to pass a path made for only two at Otedola bridge. They hit themselves and that further added to the traffic because it was hard to pull them out.”

The Ogun state Traffic Road Compliance and Enforcement Agency, Babatunde Akinbiyi, said there was a joint operation by TRACE, Federal Road Safety Corps, LASTMA and the police to reduce the traffic.

The Public Relations Officer of the Ogun State FRSC, Florence Okpe, said the narrowing of the road compounded the traffic.