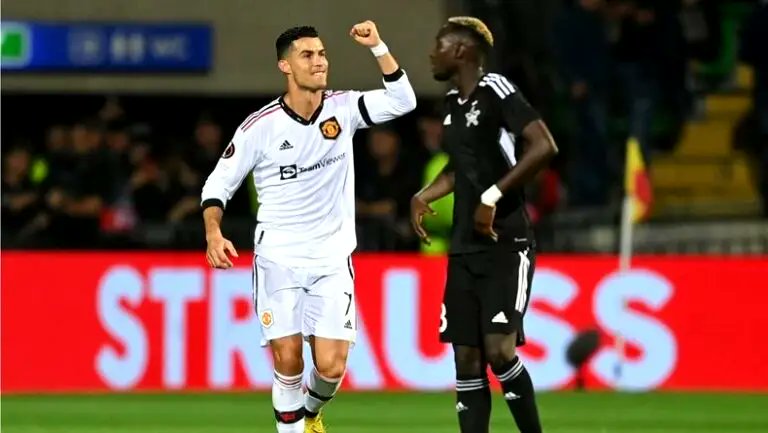 Cristiano Ronaldo scored the 699th club goal of his career and spurred Manchester United to get their first Europa League points of the season with a 2-0 victory at Sheriff Tiraspol.

The goal was the first Europa League goal of his career and his first goal this season as Erik Ten Hag’s men recovered from the 1-0 defeat at Old Trafford in their Group E opener against Real Sociedad and responded by claiming all three points in Moldova.

Ronaldo’s 699 club career goals: Record 450 goals for Real Madrid, 143 for Manchester United, 101 for Juventus, and 5 for Sporting Lisbon as well as Record 117 International goals for the Portuguese national team. (A Record 816 career goals).

Ronaldo was denied a penalty in the 15th minute after an aerial challenge from Gaby Kiki.

However, United took the lead in the 19th minute when Christian Eriksen picked out Jadon Sancho on the edge of the area with a reverse pass with Sancho jinking past a defender before placing the ball in the bottom corner.

United doubled their advantage before half-time in the 38th minute courtesy of Ronaldo’s penalty, awarded after Patrick Kpozo clipped Diogo Dalot in the box.

Cristiano Ronaldo scored his first goal of the season with a cool finish from six yards. He waited for keeper Maksym Koval to make his move and drove the ball down the middle of the goal.

Ronaldo could have taken his tally to 700 club goals but side-footed over from the edge of the area and was later replaced by Anthony Elanga. He will not get the chance to add to that until 2nd of October against rivals Manchester City, as Sunday’s scheduled Premier League against Leeds has been postponed.

Manchester United made five changes to the side that last lost their Europa League opener against Real Sociedad last Thursday.

Sancho, who was left out of the England squad earlier in the day, came close to a second but his low shot was brilliantly cleared off the line by Sheriff captain Stjepan Radeljic on the stretch.

At the other end, Sheriff could not force David de Gea into any meaningful saves and finally made a save in the 76th-minute from Cedric Badolo’s long-range strike.

Iyayi Atiemwen twice came close, a strike from range bouncing just wide as well as curling a free-kick narrowly over.

Sheriff have changed manager since last season’s Champions League heroics as many of that squad have now departed,

Yuriy Vernydub left the club in February to go and fight in the war for his homeland Ukraine after the Russian invasion.