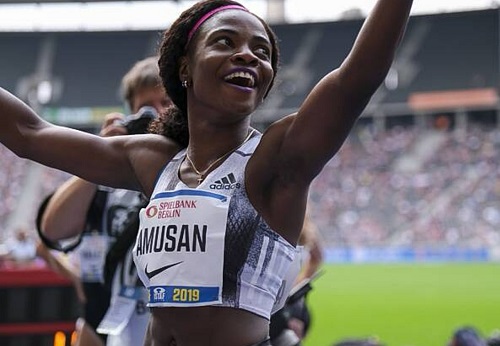 Minister of Youths and Sports Development, Sunday Dare, says a lot of countries including Jamaica, the United Kingdom and Kenya want to beat Nigeria in the fields of Athletics, following the country’s good outing at the 2022 Commonwealth Games in Birmingham.

Dare stated this when he addressed State House correspondents at the weekly Ministerial Media Briefing organised by the Presidential Communication Team led by the President’s spokesman, Mr Femi Adesina, in Abuja on Thursday.

According to him, a lot of foreign athletes are looking forward to future sports competitions, including France 2024 to beat Nigerian athletes.

He said: ”So for sports, as the focus is now that’s where we are, we are preparing for France 2024.

”The Kenyans are not happy with us because of what happened. So we know that we really need to keep at it. So that won’t get to France 2024, the standard we have set, we’ll try to go above it.

”And I’m sure that our athletes can do it.”

On youth development, the minister disclosed that his ministry had so far received N10 billion out of the N25 billion earmarked for National Youth Investment Fund.

He revealed that over 31,000 youths had benefitted from the fund, saying between N250,000 and N3 million were given as loan to the affected beneficiaries.

The minister said: ”Our youth development, of course, I can tell you off the cuff that we’ve only received N10 billion out of the N25 billion for the first year, for the National Youth Investment Fund.

”We’ve been able to disburse to over 31,000 youths. Normally there’s a process, we send out an email, you have to reply us to say thank you I accept.

”And the funds have gone to them between N250,000 to N3 million, whatever you get is based on the idea of the business that you put forward.”

Dare stated that the ministry had also embarked on digital training of youths on cybersecurity to qualify them as cybersecurity experts.

He said: ”Beyond that, trainings are going on digital training. I think the most important is the research we did as a ministry.

”We looked at the problem of skills mismatch. There are jobs out there for our youths, but the degrees they have cannot fit in for those jobs.

”We found out that the jobs available in cybersecurity in Africa alone is 1.5 million jobs.

”In this country alone, more than 350,000, that is the organisations looking for a cybersecurity expert certified.

”So, the ministry last month partner with Halogen and when we put out the call, after three days, 61,000 youths applied for cybersecurity training to be certified.

”As we speak, we’ve trained about 6,000, they have graduated, they will get their certification, we can train this 61,000 because there’s a cost implication, but we’ll take them in batches.”