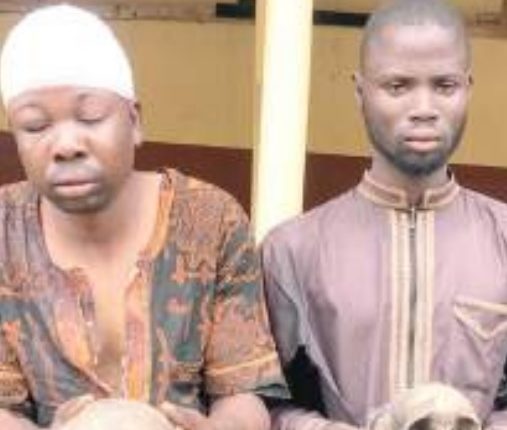 THE intervention of the Atiba unit of the Amotekun Corps in Oyo Town, Oyo State, saved two men, Ganiyu Maruf and Bashiru Basit, from being lynched on Thursday after they were found in possession of two human skulls.

The suspects were caught while they were trying to retrieve the skulls, hidden in a sack, from a bush in Agunpopo community where they had kept them.

One of the suspects, Maruf, claimed to have bought the skulls, meant to be used by him and Basit for money ritual, at the rate of N30,000.

Tribune Online learnt that Amotekun had noticed earlier through its surveillance team that some men would go into the bush and emerge with a cellophane bag and leave. This was said to have prompted the planting of some people there to keep watch.

Early on Thursday, at about 6.30 a.m., the suspects were said to have arrived in the area and when queried by the residents, they could not give a convincing explanation about their presence there. It is believed that the bushy part was being used as a depot for human skulls where the merchants went to whenever a buyer needed one.

The mob, said to be about a thousand strong, had descended on the suspects with cutlass, stones and sticks despite entreaties by the Amotekun operatives.

It took a combination of the Agro Rangers of the Nigeria Security and Civil Defence Corps (NSCDC) and the Amotekun operatives to pacify the mob before the suspects were ferried to safety and kept in custody.

It was learnt one of the suspects had earlier been arrested by the police for the same crime and was arraigned in court.

He is said to be currently on bail as the case is still ongoing. In a confession, one of the suspects, Maruf, mentioned the supplier of the skulls, one Dauda, who he said is now late. He told Saturday Tribune that he bought the two skulls for N30,000 and they were meant to be used for money rituals.

He disclosed that he had earlier been arrested by the police for the purchase of skulls but denied the allegation and did not disclose keeping them with Basit.

He said he and Basit had visited the place where the skulls were kept after he was granted bail by the court when they were rounded up by residents.

Maruf, with blood-soaked clothes, bandaged head and swollen eyes, stated further that they were saved from being beaten to death by the Amotekun operatives after a machete was used to inflict cuts on his head.

Confirming the arrest, the state Commandant of the Amotekun Corps, Colonel Olayinka Olayanju (retd), said the suspects would be prosecuted after the conclusion of investigation into the crime.