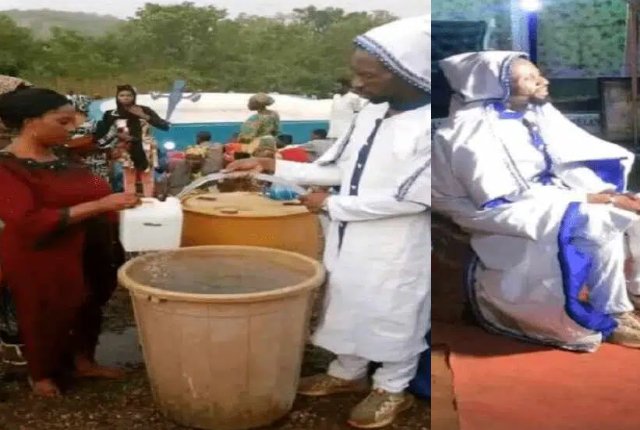 Security agencies have been directed by the Chairman of Okene Local Government Area of Kogi State, Engr. Abdulrazaq Muhammad, to investigate one Pastor Peter Michonza who reportedly sells “bulletproof water”.

Activities of the self-acclaimed Man of God got to authorities after it was alleged that he runs labor wards for pregnant women in his church.

The pastor was also accused of selling “bulletproof” water to the people, amongst other medically unacceptable practices which have reportedly led to so many deaths.

Abdulmumin Abubakar, the Special Adviser to the Chairman on Media & Publicity accused Michonza of engaging in “ungodly activities”.

Kogi Pastor who sells ‘bulletproof’ water to be investigated by security agencies
The statement added;

“The investigation became necessary after some of his alleged ungodly activities were published on social media by concerned members of the public.

“The council chairman appreciates people for blowing the whistle and exposing the alleged atrocities of Mr. Peter in the name of church activities, noting that details of the investigation will be made public in due course.”

The presiding pastor of “New Jerusalem church” located within Ageva axis of Okene, had earlier called for the release of disgraced singer, R.Kelly who was recently jailed over child pornography and rape.