[Video] I Said No, When Tinubu Wooed Me To Go For Senate – Wike 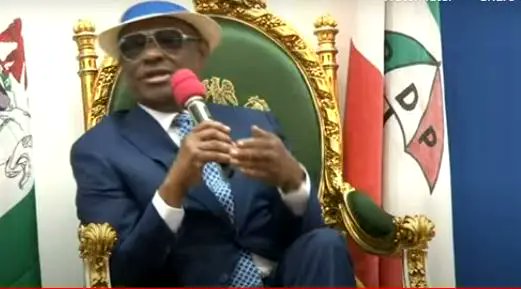 Rivers State Governor, Nyesom Wike on Friday disclosed that the presidential candidate of All Progressives Congress (APC), Bola Tinubu wooed him to run for senate after he lost the presidential ticket of the Peoples Democratic Party, PDP.

Wike made the remarks during a media chat with journalists in Port-Harcourt, Rivers State, where he spoke extensively on some of the underground politics that played out during and after the PDP’s convention which saw the emergence of Atiku Abubakar as the party’s presidential candidate.

He alleged that Tinubu accosted him amid the PDP crisis and wooed him to go for the senate, but he rejected the offer.

The Rivers State Governor added that he refused to make decisions that will affect the overall interest of the party despite the internal crisis at the national level, which he claimed was fomented by Atiku, Sokoto State Governor, Aminu Tambuwal and the party’s chair, Iyorchia Ayu.

He, however, stated that Ayu step down and give room to equity and fairness in the party.

Asked if his actions after the primaries were not traits of a bad loser, he replied, I never collected senatorial form, other candidates did and that is how you know those who are serious and those who are unserious .

He opined that he didn’t contest for the ticket because he wanted to settle for the position of vice president.

Imagine a national chairman, Ayu went ahead to describe Tambuwal as hero of the convention,

“You heard what Jang said, he described Ayu as a referee who helped one of the sides to score a goal and then blew a whistle that a goal had been scored.

“There’s nothing Ayu did not do for me not to emerge as the PDP candidate. Ayu did everything to manipulate the system to ensure that all the numbers did not add up,” he said.