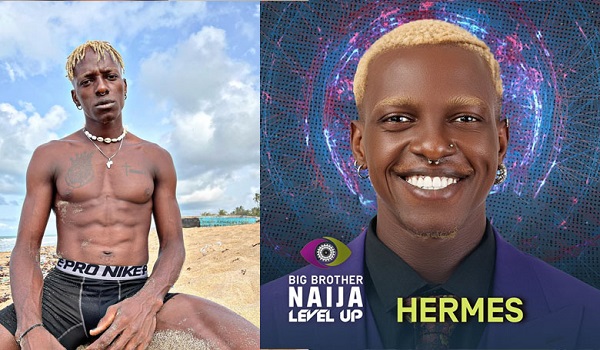 Hermes’ eviction was announced by the show host, Ebuka Obi Uchendu, during the 9th Sunday Live eviction show on September 25.

Hermes was the third housemate to be evicted at the 9th eviction and live show.

He was romantically linked with evicted housemate Allysyn till his eviction. He was one of the 10 Head Of House in the Level Up house.

The 9th week had Chi Chi as the HoH while the lost their wager.

Meanwhile Groovy has profess his love for house mate phyna

BBNaija housemate, Groovy has disclosed that his relationship with Phyna is genuine.

Groovy made this disclosure on Sunday while speaking with the host of the show, Ebuka Obi-Uchendu on his time in the house, especially with Phyna and his feeling about his eviction from the show.

He said he is leaving the show with the mindset to make the best of all the opportunities that the platform, BBnaija offers.

Ebuka, at the Sunday eviction show, made a usual dramatic call on all of the housemates to (Bryan, Groovy, Hermes, Adekunle, Chizzy, Rachael, Sheggz), after which he announced that Rachel, a rider is saved.

Immediately Rachel was saved among the housemates nominated for eviction, Ebuka then declared Groovy evicted.

Recall, Groovy, adjudged by viewers as a ‘ladies man’ had lots of romance escapades in the house, from his Beauty Tukura who was disqualified to Chomzy and then Phyna who is still in Biggie’s house.