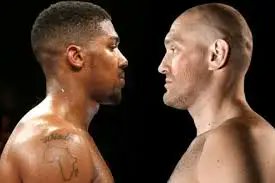 WBC champion, Tyson Fury has asked Anthony Joshua to sign the contract for their all-British heavyweight clash by latest Monday or consider the fight off.

Joshua’s team has reportedly received a contract with talks between both rival promoters ongoing.

However, to Fury, it is taking longer than expected to have an agreement reached and wants all to be sorted out by Monday.

“We’ll know by Monday anyway [if the super-fight is on] because if it’s not done by Monday I’m moving on,” Fury told Queensberry.

“I was optimistic about three weeks ago but it shouldn’t be taking this long to sign a contract.

“I’m not waiting around for some guy who’s lost three of his last five fights. He’s lucky that I’m giving him a world title shot. If not he’ll have to wait a long time to get another one,” Fury added.

The fight is being scheduled to take place December 3.