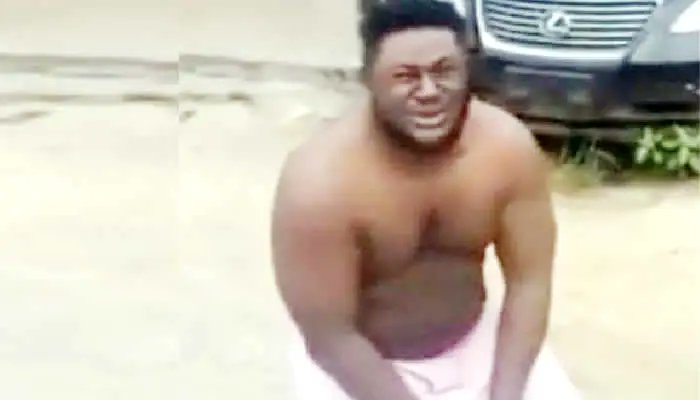 THE suspected kidnap kingpin, Emmanuel Ikechukwu Ewa, aka ‘John Lion’ who was arrested in Abuja and behind a series of high-profile kidnappings in Bayelsa State was on Monday paraded alongside three members of his gang at the Police Officers Mess, Yenagoa Bayelsa State.

Ewa was arrested by operatives of Operation Puff Adder in Abuja and was transferred to Yenagoa, the Bayelsa State capital, where he was paraded.

Ewa, who runs Lion Interior Hub as cover for his criminal activities, is known for his lavish lifestyle and heavy spending at nightclubs in Yenagoa, was paraded alongside three other members of his gang, Emmanuel Charles Angase, a 37years native of Azuzuma Southern Ijaw Local Government Area of Bayelsa State, Innocent Kingsley, 31 years, a native of Egbu Community Etche LGA, Rivers State, and one Timi Werikumo a 21-years old native of Azuzuama Community Southern Ijaw LGA, Bayelsa State. Other members of the gang are at large.

Narrating his involvement, the prime suspect, John Ikechukwu Ewa, a.k.a. John Lion, a 30-year-old native of Eruah Community in Boki Local Government Area of Cross River State, said: “I was involved in the kidnapping of Danjuma, I was not aware of the kidnapping, I was told they have a business together, I should just tell them where he is staying. I was working there in Sterling Bank as a cleaner, I left there in 2003.

I appreciate not being part of the gang, I was just misled. In sharing of the ransom they gave me as a dash N1.5 Million then $10,000 was given to me by Emmanuel when I change the money it was N7.5m.

“Lion is my name, it is the English translation of Ewa. I played the role of showing them Danjuma’s house. I did not play any role in Akin’s kidnap, I only showed them his house that he is the former boss I didn’t know that they were kidnappers.”

I HAPPENED TO BE THE DRIVER–EMMANUEL CHARLES

Another leader of the gang, Emmanuel Charles Angase, a 37years native of Azuzuma Southern Ijaw Local Government Area of Bayelsa State, said: “I am not the owner of the camp, I can’t really get the actual date but sometime last year we did a kidnapping but I was not the head, I was not even the one that brought the job but I happened to be the driver’ then this year we did a kidnapping job again but that of last year was Akim then Danjuma, that is the only two.

“What I was told is N45m for Danjuma then I was told that Akin paid N80m, they were taken to Sunikiri Creek area. I am not the leader, the leader of the kidnapping is Bale, I don’t know where he is.”

The Commissioner of Police, Bayelsa State Command, CP Ben Okoli said: “In recent times the Command was confronted with reported cases of kidnapping, armed robbery and cultism. I re-jig the security strategy with a special focus on tackling kidnapping and armed robbery.

“The strategy has paid off with the recent arrest of members of a notorious kidnapping gang by operatives of Operation Restore Peace. This gang has been responsible for over ten (10) high-profile kidnappings in the State over a period of seven (7) years.

“On 8th December 2020 one Akeeb Oladele Olushola ‘m’ 48 years a Manager of a new generation bank was kidnapped at his residence at Old Commissioners Quarters Opolo, Yenagoa, he was released on the 12th December after paying a ransom of Eighty (N80) Million Naira.

“Emmanuel Charles Angase ‘m’ 37 years, a native of Azuzuama Community, Southern Ijaw LGA, the leader of the kidnapping gang. He operates a kidnapping camp at Sunikiri Creek near Oluasiri in Nembe Local Government Area with his second in command one Gbalipre Gamage now at large. Police operatives recovered a brand new Toyota Avalon he bought for his wife with the proceed of ransom he collected.

“The gang leader Emmanuel Charles Angase has confessed that on 30th June 2022 at about 0600 hours, himself, John Ewa and others at large accosted Danjuma Omeje at the entrance of his house at Okaka, kidnap him and fled in a Blue Toyota Corolla Car with REG NO KJA 225 AY. They took the victim to his camp at Sunikiri Oluasiri, and release him on 14th July 2022 after collecting Sixty 60 million ransom. The suspect also confessed to the kidnap of Akeeb Oladele Olusola a banker and Nancy Keme Dickson, a younger sister of former Governor Senator Seriake Dickson who was kidnapped on 26th December 2015. He also confessed to the kidnap of Chinonso Eze and other Igbo Businessmen.

“John Ikechukwu Ewa ‘m’ 30 years aka John Lion, a native of Eruan Community in Boki Local Government Area of Cross River State, known for a flamboyant lifestyle on social media, a former cleaner with a new generation bank, confessed to having collected Ten (10) Thousand US Dollars from the ransom collected in the kidnap of Danjuma Omeje.

“All the suspects will be charged to court at the conclusion of the investigation.

“The Bayelsa State Police Command under my watch has firmly resolved to make the State uncomfortable for criminals. Our Officers are determined more than ever to rid the State of criminals’ elements and to ensure our communities are safer for businesses and economic activities to thrive.”