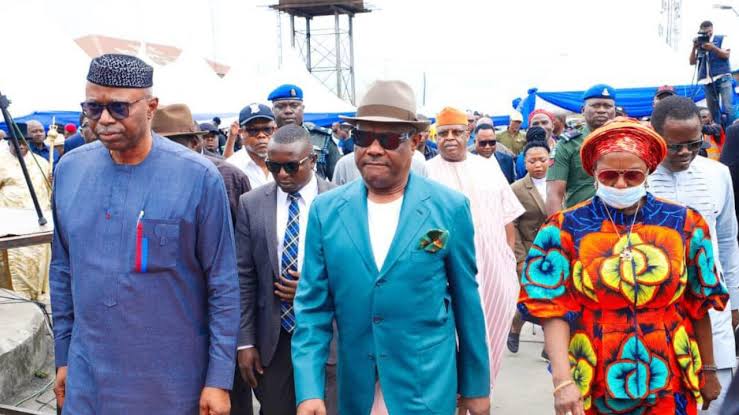 There were indications at the weekend that Rivers State Governor, Nyesom Wike, and his supporters have returned to the trenches to fashion out new strategies on how to not only remove Senator Iyorchia Ayu as national chairman of the Peoples Democratic Party (PDP) but also install former governor of Ondo State, Dr. Olusegun Mimiko, as his replacement.

A source told Daily Sun that the Rivers governor and Governor Samuel Ortom of Benue State left the country on Friday for a destination in Europe and may be joined by Governors Seyi Makinde and Okezie Ikpeazu of Oyo and Abia states respectively for another round of strategy session.

The Wike camp has been on warpath with the PDP and the presidential candidate, Atiku Abubakar, since the emergence of Delta State Governor, Ifeanyi Okowa as Atiku’s running mate. The aggrieved party leaders have continued to insist on Ayu’s replacement with someone from the South to create a North/South balance in the PDP, ahead of the 2023 polls.

Multiple sources told Daily Sun, yesterday, that Atiku’s stance that change of the party’s National chairman and replacement border on its constitution notwithstanding, the Wike camp is resolved in their bid to cause change of guards. Already, the Wike camp has penciled down Mimiko as replacement outside PDP’s constitution. It was gathered that the Rivers governor is not only pushing for Ayu’s resignation but also the removal of the National deputy chairmen to create room for Mimiko’s emergence.

A competent source said: “They are unrelenting. They are exploring different options to force Ayu out. But they would prefer the national chairman to just resigns quietly. They already pencilled down Mimiko as replacement. This is why Mimiko is with them.”

When reminded that Ayu’s removal and his replacement outside the provision of the party’s constitution could lead to litigation that would further derail the PDP, the source said: “The Wike camp doesn’t care. Their interest is to make a statement that they can’t be ignored. They want to dictate what happens,” he said.

Wike had last week, announced that he has no plan to quit the PDP over his stand-off with Ayu and the party’s presidential candidate, Atiku Abubakar, noting that he would remain in the party and continue his fight for ‘inclusivity’.

The camp of the Rivers State governor, which include Governor Ortom; Governor Ifeanyi Ugwuanyi, Enugu; Governor Ikpeazu, and Governor Makinde, last week announced withdrawal from the PDP Presidential Campaign Council pending the replacement of Ayu as chairman of the opposition party.

However, while the PDP chairman has repeatedly said that he would not resign, Atiku has maintained that he cannot force Ayu to quit his position, except through constitutional means.

Another source at the PDP national secretariat, told Daily Sun that the supporters of the Rivers State governor believed that Ayu would eventually be forced to throw in the towel.

Stakeholders in the PDP have continued to kick against the move to remove Ayu before the 2023 polls, saying it would not be in the best interest of the party.

He said: “For all pragmatic purposes, election is just a couple of months away. What should be important and uppermost in the mind of all PDP leaders is how to win that election. The issue of the national chairman can wait. But revamping and rescuing Nigeria cannot wait. We want to appeal to everybody to see reason.

“I don’t think it will augur well for our party to dabble into unconstitutionality just a couple of months to the election. Removing Ayu for what purposes? All of us must go along with the just concluded NEC that passed a vote of confidence in Ayu. That is my advice to everybody. It will not augur well for anybody to continue to fight at this moment.”

Also a member of the PDP National Executive Committee (NEC), who pleaded anonymity, because of his relationship with one of the aggrieved governors, told Daily Sun, that inasmuch as he agrees that Ayu has not managed the crises well, replacing him would be counter-productive.

It was gathered that most PDP leaders do not want the removal of Ayu because the Rivers governor’s camp has always been involved, one way or another, in leadership changes in the party.

When contacted, the PDP National Publicity Secretary, Debo Ologunagba, told Daily Sun that conversations were on at different fora to resolve all contentions in the party. Ologunagba expressed optimism that in no time all PDP leaders would close ranks for the task of rescuing the country.

“Reconciliation is a marathon and the party will continue to reach out to every stakeholder. And that is ongoing. Consultations are going on different levels. We believe that there is need for every member, every stakeholder to be involved in the mission to rescue Nigeria. So, conversations are going on . And it will continue and that is the essence of reconciliation. There is no cause for alarm. We assure Nigerians that at the end of the day the party will be united for the sake of Nigeria and to ensure that the rescue mission begins in earnest,” he said.

When our correspondent sought to know, if the Wike are ready to shift grounds in any form, the source, said that in the event they can”t install Mimiko as replacement, they may accept the deputy national chairman (North) Umar Damagun, to take over as acting chairman until after the 2023 general elections.

Despite Ortom’s stance, Atiku will get 65% votes in Benue’

Leader of Ward2Ward4Atiku, Abraham Chila, has said Atiku would get 65 per cent votes in Benue State despite Governor Ortom’s support for Governor Wike, in the power tussle within the party.

Governor Ortom had pitched tent with Wike, tasking the PDP to meet the demands of the Rivers State governor who has been clamouring the resignation of the party’s Chairman, Iyorchia Ayu.

But, in an interaction with journalists in Abuja, yesterday, Chila disclosed that regardless of whatever stunt the governor pull during next year’s general elections, PDP and Atiku will always garner 65 per cent. He pointed out that from 1999 to date PDP has become entrenched in Benue State, adding that the fact that Dr. Ayu is the national chairman makes it imperative that nothing could change the voting pattern in the state.

“You may wish to know that my governor, Dr. Samuel Ortom, is also a candidate for the Senatorial election in next year’s election. Interestingly, the presidential election and that of National Assembly come up the same day.

“So, with Governor Ortom’s fate tied to that of His Excellency, Vice President Atiku Abubakar, it is impossible for PDP to get less than 65% of the total votes cast. And with our son, Dr. Iyorchia Ayu, as the national chairman, PDP has the bragging rights for the maximum votes from Benue State,” Chila noted.

Chila, who contested the party’s ticket for Kwande/Ushongo federal constituency, explained that being a predominantly agrarian state with more population in the rural communities, no other political party can achieve rural penetration more than PDP.

He added: “Further, you know that the first thing that comes to your mind when it rains is an umbrella.

“Now, serious rain is beating Nigeria both in the area of security and economic downturn. Our people remember the umbrella and how PDP provided the good old days. We need stability and security and Benue State voters know that the only man that can pull Nigeria back from the precipice is Alhaji Atiku Abubakar.The former Vice President is not coming to the Presidency as a learner, but will bring his wealth of experience to bear on national reconstruction.

On calls by some PDP stakeholders on Dr. Ayu to resign, Chila stressed that those making the calls were either mistaken or mischievous, arguing that the former Senate president emerged through a foolproof process that was not controverted.

According to him, those urging the national chairman to quit when he committed no impeachable offence amounted to questioning the very rudiments of democracy as only the party through a national convention, which is the highest caucus of the party, could make such demands.

“Ayu has not committed any offence. Therefore, anybody asking him to leave office is indirectly calling for the proscription of PDP, which is not attainable in a democracy.

“People should look beyond Ayu as an individual, he represents that party on account of the mandate freely given to him.

“Do we have to wait for 24 years before being considered for the presidential ticket, why must we throw away the consolation prize of national chairman?” Chila demanded. (Daily Sun: Text, excluding headline)