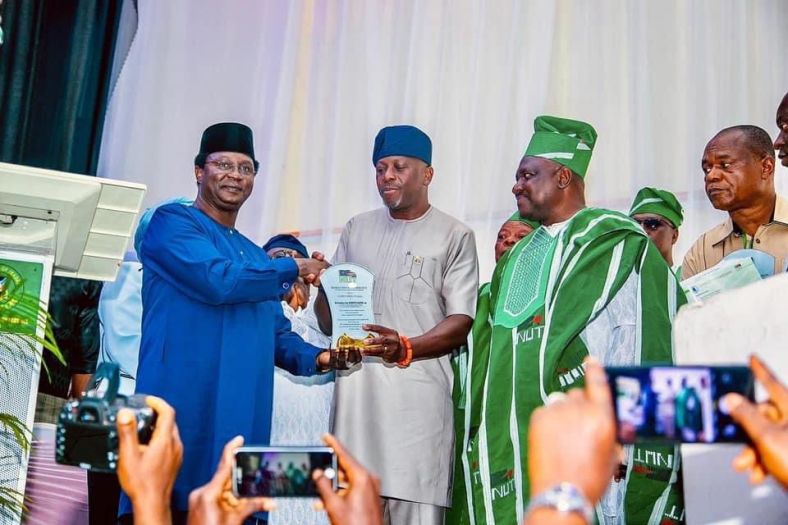 Oyo State Governor, ‘Seyi Makinde, on Wednesday, was honored with the ‘Golden Prize of Teachers’ award at the just concluded 58th National Delegates Conference of the Nigerian Union of Teachers, NUT.

Speaking at the event, which held at the International Conference Centre, University of Ibadan, after receiving the award on behalf of the governor, the Chief of Staff, Otunba Segun Ogunwuyi, noted that the current administration in Oyo State would continue to prioritize the welfare of teachers as a crucial part of educational system.

He stated that Governor Seyi Makinde-led administration is doing everything humanly possible to give the welfare of teachers topmost priority, with a view to boosting their morale and make performer better while dispensing their duties.

“Gone are the days when you have signages on properties that a particular house is for rent but not for teachers. Of course, we have changed that narrative in Oyo State by restoring the dignity of the teaching profession through the various incentives we have provided.

“Since assumption of office on May 29, 2019, His Excellency, Engineer Seyi Makinde, has ensured that all workers in the State, including teachers, get paid on the 25th day of every month, which is popularly regarded as ‘GSM Day’.

Aside that, arrears of primary school teachers’ salaries for four months were cleared off immediately the governor assumed office in 2019.” Ogunwuyi asserted.

He further disclosed that the disparity in the payment dates for teachers’ salaries and that of other civil servants was removed immediately.

“Teachers were paid a month after civil servants before we assumed office but, today, there is nothing like that. All workers and pensioners in Oyo State receive their emoluments the same day.

“Part of the achievements of this administration include 27.5 per cent teaching allowances, leave bonuses, 13th month salaries, regular training for teachers, appointment of 10 Tutors-General and 10 Inspectors-General with equivalent rank of a Permanent Secretary.

Ogunwuyi, however, appreciated the leadership of the Nigerian Union of Teachers for honouring his principal, the Executive Governor of Oyo State, with the award and for giving him a new name – ‘The Teachers’ Governor’.

While saying it was a call to do more as one good turn deserves another, Ogunwuyi maintained that the award was an attestation to the fact that the people-oriented governance style of the governor is yielding results.