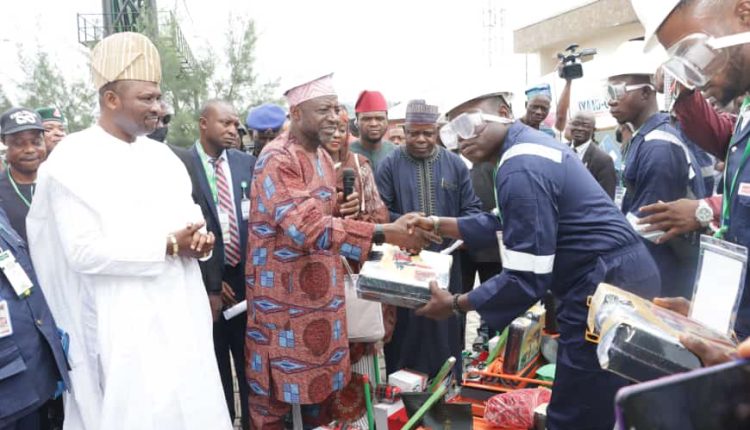 As part of the efforts of the Federal Government under the administration of President Mohammed Buhari to provide job opportunities for youth in the country, no fewer than 100 youth selected from Ibadan, Oyo State are currently benefiting from the Federal Government’s youth empowerment programme aimed at giving new skills and modernising activities of artisans in the plumbing vocation.

The training programme is targeted at addressing challenges of professionals and also to further upgrade their skills.

The National Agency for Science and Engineering Infrastructure (NASENI), distributed state-of-the-art equipment, tools and diagnostic kits worth several millions of naira to the one hundred participants in Ibadan.

According to reports, a similar exercise kicked off in Kebbi State recently where youth from the area were given training, modern equipment and tools in modern farming.

The Executive Vice Chairman of NASENI, Engr. Mohammed Sani Haruna while flagging off the training in Ibadan said that NASENI was carrying out President Muhammadu Buhari’s directives.

His words: “The time has come to put an end to the habit of giving out technical jobs meant for Nigerians to foreigners or migrants from neighbouring countries. President Buhari’s intention is the prosperity of the youths and job satisfaction so they could take their plumbing work seriously and move to the highest level of efficiency and professionalism in plumbing.”

In a statement signed by the Deputy Director Information, NASENI, Mr. Olusegun Ayeoyenikan said the youths selected from Oyo State are benefiting from the first phase of the programme targeted at those who are already in the profession of plumbing and the capacity building focuses on reskilling the plumbers to handle installations and maintenance of plumbing works with modern techniques, tools, diagnostics and equipment.

Other safety kits given to the trainees include Smsafety shoes, eye goggles, mechanical hand gloves amongst others.

“Youth and their empowerment had become the most critical socio-economic programme for sustenance of any modern economy and also a glimpse at the idea of what the future of the country will look like. Empowering the youths and especially a critical subsector like plumbing is critical to housing and general construction,” he noted.

He also disclosed that youth empowerment programme was central to his legislative agenda and charged the trainees to use the equipment and tools to increase their efficiency in the course of carrying out their tasks on site.

“The presidential mandate to NASENI in the on-going exercise is to move round the 36 states of the country to empower 100 youths in each location on such areas and skills where it is observed that critical vocational skill lacks efficiency and therefore need upgrades, new skills acquisition, tools and equipment to advance such identified vocation”, Akinremi stated.