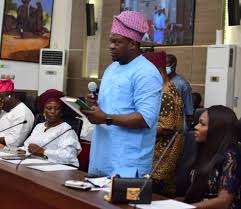 Following the reported story of the assualt on a legal practitioner- Barrister Fowode by Hon. Sheriff Adeojo, the suspended Chairman of Ido Local Government Area Council of Ibadan, independent media investigation was carried out into the allegation to ascertain if indeed the son of the prominent Ibadan business mogul and politician Alhaji. Yekini Adeojo assaulted the lawyer.

Investigations revealed that the duo were indeed present at the said Lounge at the same time on the day the alleged assault was said to have occured for a social outing.

It was gathered that what started as a social banter between two old friends resulted into voices being raised at both ends of the table where the parties were in the company of other friends and associates.

According to an eye witness report, the issue was a mere social banter which led to verbal arguments but which did not degenerate into a fistcuff between both parties as reported by some bloggers and online news outlets.

However, from the circumstances surrounding the matter and what was deduced from the narrations of some of the witnesses present at the scene, Barrister Fowode, the alleged victim was unhappy that matters could degenerate into verbal altercation between him and Honourable Sheriff Adeojo whom he regards as a friend and long time associate.

Westernmirror contacted both parties, the matter according to them has since been resolved and laid to rest, and normalcy has since returned between them.

In Adeojo’s words, “the matter has been resolved and we have since put the past behind us because we are friends and will remain friends.”

Upon further investigation, it was revealed that both parties committed to sustaining their friendship and sustaining the peace while honouring an invitation extended to them by stakeholders.

In the words of Barrister Fowode, “people have intervened on the matter and because of the kind of background and training I have, I’ll say in a nutshell, we have resolved it.

Corroborating Barrister Fowode’s submission, Honourable Sheriff Adeojo confirmed that he apologized to his friend because such an issue should not have occured between them in the first place.

In his words, “It was a usual social gathering where we were having a great time until a topic we were discussing led to raising of voices.

“Being a public figure and having the utmost regard for my friend Barrister Fowode, it is my place to apologize to him for allowing an ordinary social banter become one of verbal exchanges.

“And I apologized without any reservations for enabling it. As you can see, it provided fifth columnists the opportunity to tarnish my name and image. I am not a trouble maker as insinuated”.

Consequently, both parties seem to have settled amicably and normalcy has since been restored between their friends.