We Stole Micra Vehicles in Ibadan, Sold Them at N70,000 Each — Suspects Confess to Oyo Amotekun 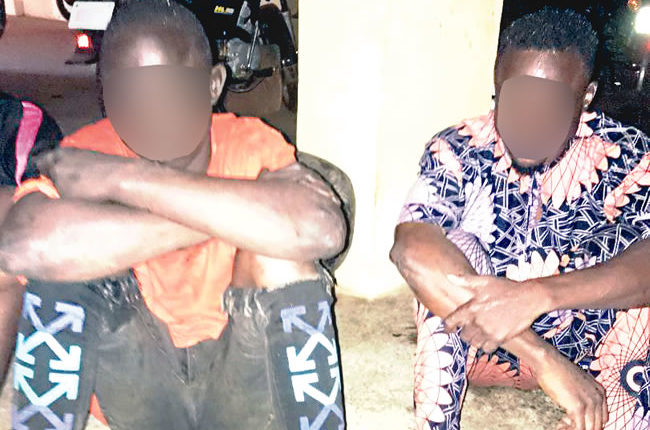 According to report, the suspects — Makinde Tunji and Ajibola Abayomi, were apprehended by the Amotekun Corps last Friday in the Olopometa neighborhood of Ibadan, the Oyo State capital.

While addressing newsmen, Mr. Kazeem Babalola Akinro, the Deputy Commandant of Amotekun Corps (Ibadan command), explained that the suspects were involved in stealing Micra cars from the city and driving them to their customers at Ijora in Lagos State.

The Deputy Commandant recounted how that the duo had successfully stolen five Nissan Micra automobiles and managed to sell three of them while abandoning the other two, which broke down, before they were finally caught.

“The suspects would be given to the state police command for additional investigation”, he added.

Abayomi, a 31-year-old driver, told newsmen that he was picked up by Amotekun Corps following the arrest of his partner, Tunji, for robbing a store and breaking into it.

He said: “The arrest of my friend (Tunji) led to mine. He was arrested for breaking into a shop. During his confession to Amotekun Corps, he told them of our stealing of Micra cars from where they are parked. That was how I was also arrested.”

Abayomi while describing their mode of operation disclosed that Tunji is always the mastermind behind each of their operation, in charge of logistics and has the contact of their customer who buys the stolen vehicles from them.

“Tunji is the one who has connection with our link in Lagos. He would search for a vehicle we would pick. After telling me, I would take him to the spot in my own Micra car. Sometimes, I would not go with him. He would go alone. All I would do is to give him money that he would need or battery for the car.

He backed up Amotekun Corps’ Deputy Commandant’s account, claiming that he and his accomplice had begun the thefts in May and had taken five Nissan Micra vehicles, three of which had been delivered to Lagos State successfully, while the other two had been abandoned at a location along the road when they began to exhibit irreparable defects.

According to Abayomi, Tunji had been with him since he was a child, and also taught him how to drive.

“At a time, he went to Lagos and was driving a bus. We saw again when he returned to Ibadan.

“Tunji started doing the ‘runs’ (stealing Micra cars) and I would be the one to take him there. I used to give him my car key because it can open others. He didn’t use master key.

“We stole all the vehicles from Olopometa, Moradeyo and Iwo Road areas, but the ones from Iwo Road were found by their owners where they were abandoned,” Abayomi confessed.

He further admitted that two of them used Indian hemp for smoking.

Abayomi lamented his fate, claiming that his wife is currently pregnant and that he was tempted to conduct crime out of avarice and covetousness.

Tunji, a resident of Ibadan’s Lalupon village, confirmed Ajibola’s account in his own confession, admitting that he was the one who directed Amotekun agents to his partner’s home for his arrest, after he made his own confession.