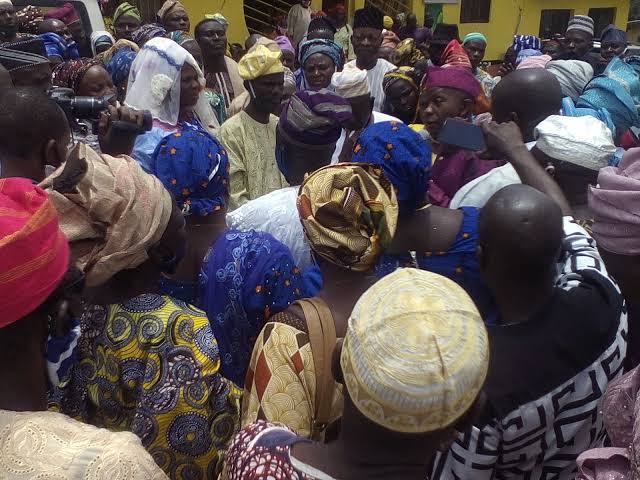 Traders in Oyo State on Thursday marched down to the state government secretariat for the second time in less than a week to protest and stop attempt by the Traders Advisory Council to illegally install Alhaji Yekini Abass as the Babaloja-General of Oyo State.

The traders who went straight to the venue of the proposed meeting to chase away those alleged to have masterminded the coup also accused Mr Bayo Lawal, the Commissioner for Trade and Industry of complicity.

The spokes person for the traders, Comrade Sikiru Adetunji, popularly called Sikol, during interview with journalists on Wednesday said they were surprised that after the aborted coup last week, same people gathered again for execution of their evil plan which is against the interest of over 2.5 million traders in the state.

He said, “It was quick intervention of some traders from various markets in 11 local government councils in Ibadan that stop the traitors who are behind the unjust agenda to install Alhaji Yekini Abass otherwise called Y. K. Abass as Babaloja-General of Oyo State last week.

“Imagine, same people gathered again on Tuesday, exactly 6 days after, to carry out their iniquitous plan. We have stopped them again, however, any attempt by them to gather for the same purpose again will not be taken lightly by us.

“We didn’t just accuse Mr. Bayo Lawal, the Commissioner for Trade and Industry of complicity, we premised our claims on his utterances when Alhaji Sunmaila Aderemi Jimoh who was voted and installed as Babaloja-General of Oyo State in 2020 by the conference of Babalojas and Iyalojas in Oyo State visited his office at Agodi Secretariat.

“The Commissioner asked Alhaji S. A. Jimoh to resign and allow Y. K. Abass to take over, he promised to install Alhaji Jimoh’s wife as Iyaloja-General of Oyo State if he comply with his ungodly manipulation, but Alhaji Jimoh declined.

“He told the Commissioner that his wife hasn’t anything to do with market leadership title, besides, he didn’t make himself Babaloja-General, therefore he can’t drop the title, and Bayo Lawal promised to ensure peace elude traders’ associations in Oyo State untill he has his way.

“If Alhaji Jimoh had agreed to the offer placed before him by the commissioner, traders in Oyo State would have been in disarray by now, because the position of Iyaloja-General is also not vacant. The current Iyaloja-General of Oyo State, Alhaja Saratu Aduke Konibaje was dully elected and sworn-in by the same conference of Babalojas and Iyalojas in Oyo State.

“We want members of the public to know that our people are men and women of integrity, lovers of peace and defenders of people’s rights. We are trying to prevent breakdown of laws and order, but Mr. Lawal should not take our calmness for granted, he should not set Oyo State ablaze.

“We wouldn’t know, possibly the commissioner is still ignorant of the fact that the Conference of Babalojas and Iyalojas in Oyo State had earlier elected, ratified and sworn-in Alhaji Sunmaila Aderemi Jimoh as Babaloja-General of Oyo State ever before some traitors and rebellions conspired to arranged kangaroo installation for Y. K. Abass.

“We are also sure that the commissioner is in possession of the court judgement that declared the installation of Y. K. Abass as null and void.

“In the judgement, the court said no traditional ruler has right to install or involve in the process of installing Babaloja-General or any market leadership tittle.

“We therefore see the action and utterances of Mr. Bayo Lawal as disrespect to the court orders, which is not good for our nascent democracy”, he added.

Meanwhile, the youth leader appealed to those in the administration of Gov. ‘Seyi Makinde to stop misrepresenting the governor and his administration.

“We know the state governor to be a respecter of rule of law and a believer in fairness and justice. He hasn’t anything to gain in encouraging illegality or promoting unjust agenda, so we appeal to those in his administration to steer clear traders issue.

“We are like other registered associations, we have chosen our leaders and we are pleased with our choices”, he stated.