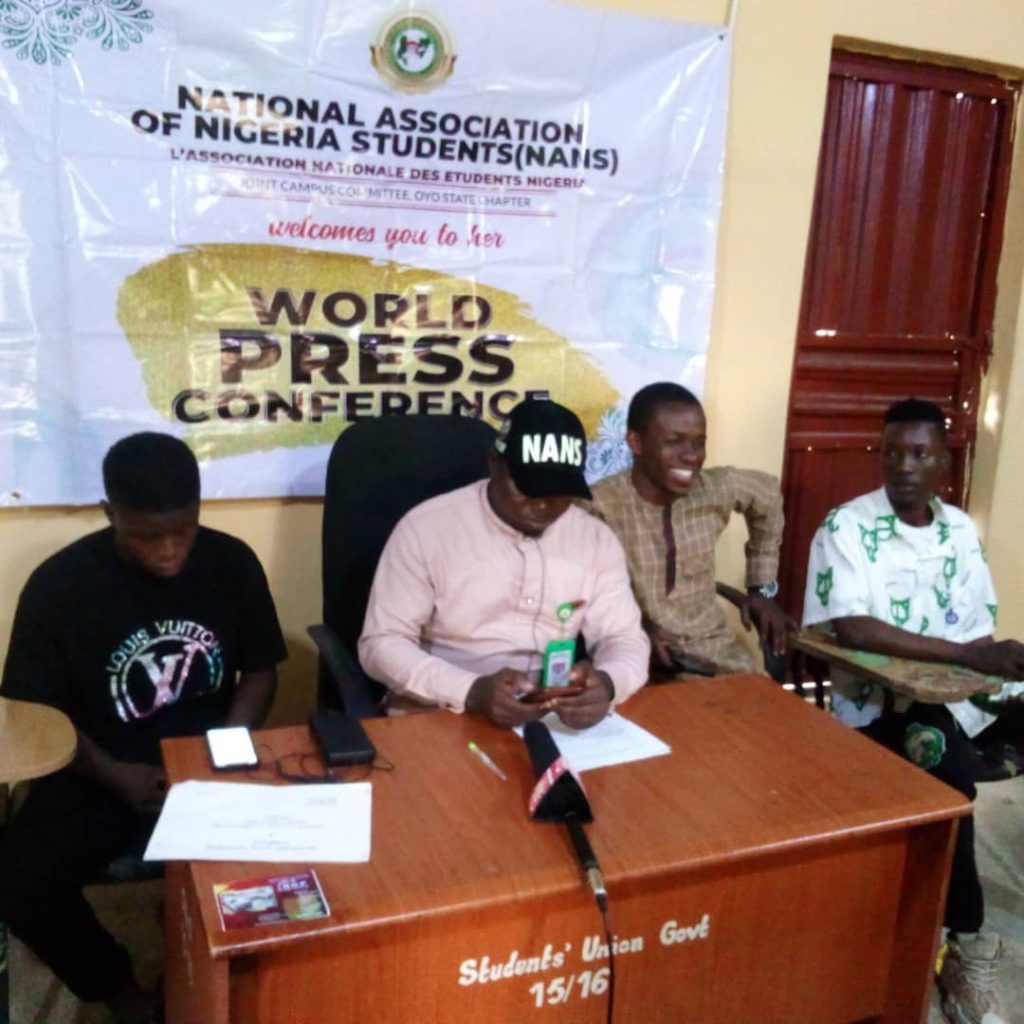 The Oyo State Chapter of the National Association of Nigerian Students (NANS) Joint Campus Council has make demands and alledge the State Government of neglect of it’s Association over the last 3 and half years of this present administration.

In a press Statement Signed by it’s Chairman Comrade Adeleke Quadri and made available to TODAY SPLASH the association call for the governor’s listening ear, issued a 7-day ultimatum to the Oyo State government, adding that failure of the State Government to meet with them or their demands will be greeted with Massive protest from students across the state.

Distinguished Sir, in over 3 years of your administration, the NANS JCC commends some of the successes that you have recorded in transforming the state, including in facilitating a conducive environment for the delivery of infrastructural, human capital and educational development across the State. We recognise that these achievement are not without its challenges neither were they accomplished without consultation with relevant stakeholders that could ensure a hitch-free achievement of these outcomes. Nevertheless, Your Excellency, despite your immense multi-sectoral work and achievements, the student community in Oyo State do not enjoy maximum support from the administration, including feeling a sense of deep articulation of their needs in the design and delivery of different educational programs and actions. As constructive engages and people with a deep sense of functional interactions, we have made numerous efforts to engage with His Excellency to present and discuss some of our concerns to ensure that the government’s efforts on effective education delivery achieves maximum impact on Oyo State students. We made these efforts through the SA on Students; however, these efforts went futile without achieving audience from the State’s leadership.

While the administration of His Excellency, Engr. Seyi Makinde is seeking a second term mandate to continue its work, we know that first term will end in a few months, yet it has not met with the student community through its leadership. While we believe this development to be unfortunate and unrepresentative of the nature of our Governor, we are aware of diffrent meetings with other unions and associations, including the National Union of Road Transport Workers in Oyo State, among others. Considering the failed attempts of His Excellency, The Executive Governor of Oyo State to meet and deliberate some of the concerns of the student community through NANS-JCC in Oyo State, we consider such actions as an outright non-recognition of our agency, contributions to state development, particularly on issues that affect us directly, and an undermine of the power of our institution.

NANS-JCC in Oyo State has maintained restraint on any dysfunctional action that could portray the administration of His Excellency in bad light or undermine its achievements by employing the 2Cs (Consultation and Consolidation) of the Aluta Struggle, which have now failed to yield tangible results. Hence, we will be proceeding with the third C (Confrontation) of the Aluta Struggle through a mass protest if our demands are unmet within 7 days:

** Bursary support to Oyo State students in all tertiary institutions across the country.

** Provision of mobility (Aluta Buses) for Student Union Governments of our tertiary institutions throughout Oyo State.

** The creation of job opportunities for qualified graduates of our tertiary institutions and student leaders in Oyo state.

** The re-estaintement of victimized student leaders who were wrongfully indicted for offences/crimes for which they have now been exonerated in their places of work.

** Provision of economic empowerment programs and initiatives by the State Government for Nigerian students in Oyo State.

** Increased pressure by the Oyo State Government on the Federal Government of Nigeria to meet the demands of ASUU in order to facilitate an end to the strike and to enable students to return to class. Also, we demand the delisting of the Minister of Education from the list of nominees for the national award, considering his apathy to the ASUU strike.

Your Excellency, Sir, we would wish to have approached these issues through dialogue; however, different circumstances have made it incumbent upon us to adopt this route. While we extend our humble regards, we anticipate that the administration understands the urgency of these demands.