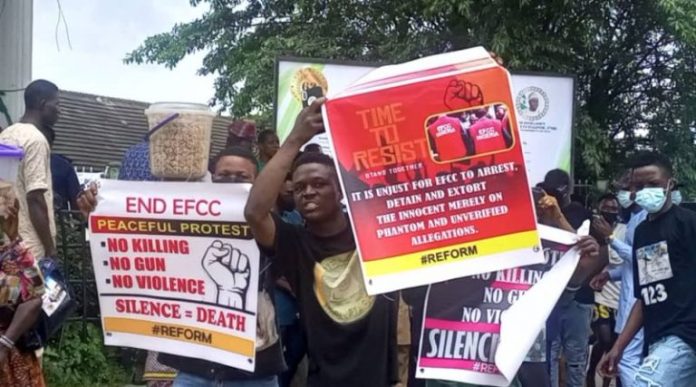 Some youths have accused personnel of the Economic and Financial Crimes Commission of extortion.

The youths organised a protest against the EFCC on Thursday in Ibadan, Oyo State. The protest comes days after some youths held a similar protest in Warri, Delta State.

The PUNCH gathered that the youths, who took the protest to the Oyo State Government Secretariat, Agodi, Ibadan, expressed displeasure with the conduct of the anti-graft agency, as they alleged assault on innocent youths.

The protesters were seen holding banners, some of which read, “Enough of the extortion from EFCC,” and “End EFCC,” among others.

The youths, who also caused traffic around Bodija area of Ibadan, accused the EFCC of carrying out illegal house searches and arrests in their operations. They sought the review and reform of the agency’s activities.

The ‘END EFCC’ is coming in a few days to the memorial of the October 20, 2020 #EndSARS protest, when shootings took place at Lekki Tollgate by the Nigerian military.