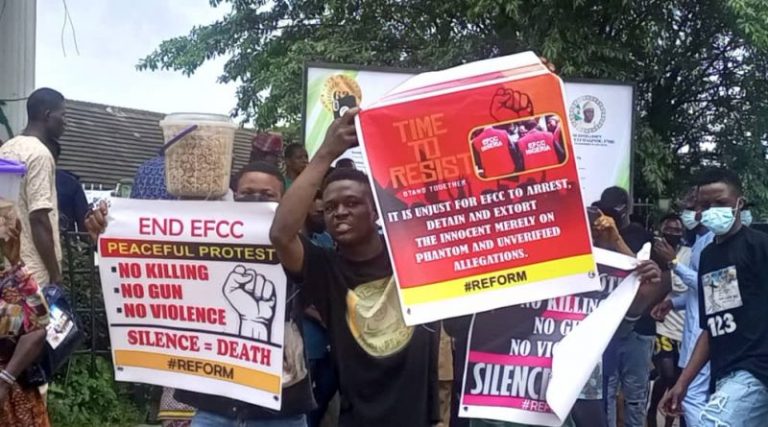 The Economic and Financial Crimes Commission (EFCC) has reacted to the protest embarked upon by some youth in Ibadan yesterday.

The EFCC said it will not be deterred by the smear campaign, stating that it will continue to rid Nigeria of all forms of economic and financial crimes.

Recall that this Newspaper had reported that some youth gathered around the Bodija area of Ibadan on Thursday, to call for the scrapping of the anti-graft agency over its mode of operation.

The protesters, who took the protest to the Oyo State Government Secretariat, Agodi, were seen holding banners, some of which read, “Enough of the extortion from EFCC,” and “End EFCC,” among others.

Similarly, it was gathered that some youths had a protest in Warri, Delta State.

Reacting on its verified Twitter handle, the anti-graft agency restated its commitment to locate, arrest and investigate anyone causing economic unrest in the country.

It said, “The EFCC’s mandate is to rid Nigeria of all forms of economic and financial crimes and will not be deterred by a mere campaign of calumny.

“Yahoo boys came out to protest because the eagle strongly detests their fraudulent interest but the EFCC will continue to do her best to locate, investigate and arrest anyone causing economic unrest”, the statement added.