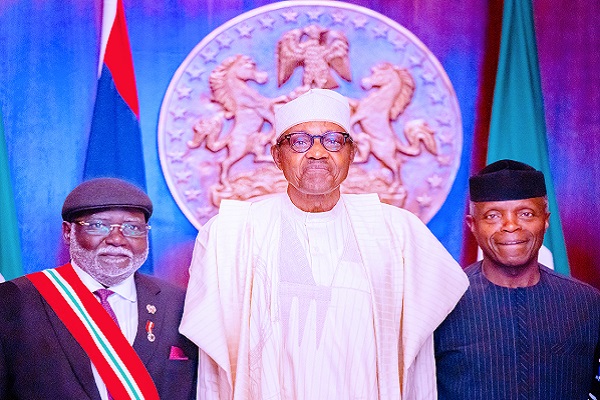 The swearing-in ceremony, which took place briefly before the commencement of the week’s Federal Executive Council (FEC) meeting, was witnessed by Vice President Yemi Osinbajo as well as Governors Seyi Makinde(Oyo) and Rotimi Akeredolu (Ondo).

Also seated as witnesses to the ceremony were other Justices of the Supreme Court of Nigeria; the Secretary to the Government of the Federation (SGF), Boss Mustapha; Head of the Civil Service of the Federation, Dr Folasade Yemi-Esan; Chief of Staff to the President, Professor Ibrahim Bambari and the National Security Adviser (NSA), Maj. Gen. Babagana Monguno (Rtd).

Speaking to journalists after his swearing-in ceremony, Justice Ariwoola appealed to politicians to allow the judiciary function properly as the 2023 elections approach while promising reforms at the apex court

Makinde expressed gratitude on behalf of the people and government of Oyo State to the President.

The Council observed a minute silence in honour of former Minister for Special Duties and Chairman of the People’s Democratic Party (PDP), Chief Vincent Ogbulafor, who died recently.