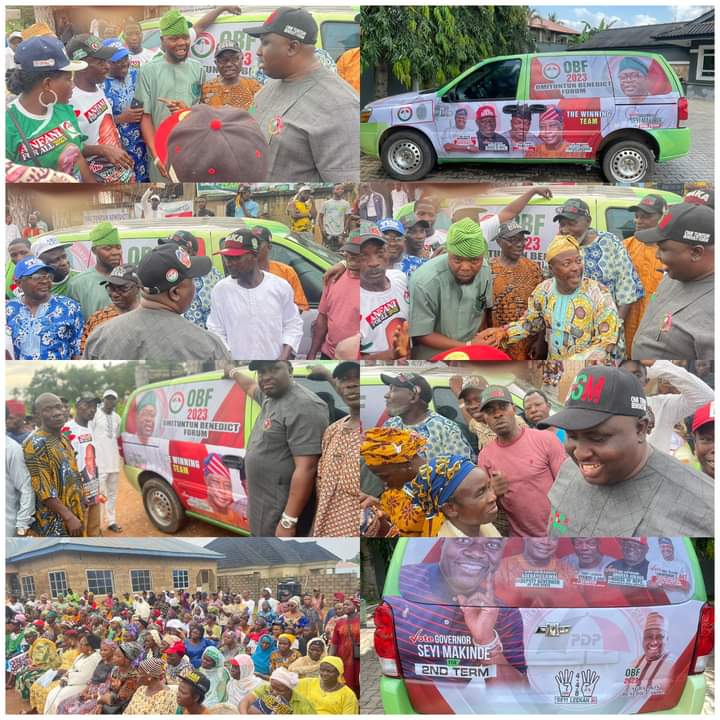 The Founder of Omi-tuntun Benedict Forum and a Chieftain of The People’s Democratic Party (PDP) Agba-Akin Benedict Akika has donated a campaign Bus to his Forum.

The presentation of the campaign Bus was done at the weekly general meeting of the Forum at Lagelu local government.

The Agba-Akin of Olorunda Abaa, While presenting the campaign vehicle said “this is to further strengthen our movement during camping and ensure hitch free movement of members during our door-to-door campaign” Governor Makinde has tremendously develop the state since he resume office, he has kept to his campaign promises, it’s time to support a man who has change the narrative when it comes to governance, we will do everything within our powers to ensure he’s re-elected for the second term in office, adding that One good term deserves another.

The Agba-Akin of Olorunda also appreciate Mr Michael orobiyi (MAN DEGBO) for donating the vehicle to is forum, He prayed that God’s Mercy’s continue to reign in his life and family.

The Chairman of Omi-tuntun Benedict Forum (OBF) Hon. Olamilekan Akinade while recieving the campaign vehicle appreciate the founder for taking what he called ‘the bold step’ in his words “Agba-Akin has over the years proven that he’s a man of his words, aside from embarking on various empowerment programs to ameliorate the sufferings of the masses, which was inline with Governor Seyi Makinde’s Mantra ‘Poverty to Prosperity’, It’s time to work assiduously for the re-election of our ever working Governor, adding that the bus will serve as tonic for the forum while discharging their duties.

Members of Omi-tuntun Benedict Forum (OBF) loud the move of their founder and promise to key into the project ‘Seyi Makinde 2.0’, assuring their founder of total support.