Oyo Deputy Gov: A Prophet With Honour In His Home Town 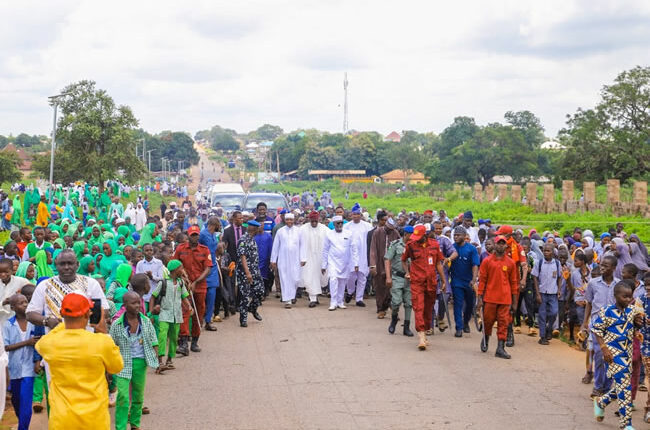 Though that would not be the first time that the drums were rolled out for the one-time Commissioner for Justice and Attorney-General of Oyo State, in Kishi, his home town, having been installed as the Baamofin of Kishiland by the Iba of Kishi, Oba (Dr) Masood Oyekola Aweda, years back, the latest honour came amid far weightier considerations.

The community, as represented by the Kishi Progressive Union, the apex pro-development association in the town, described the civic reception as a platform to honour their worthy Ambassador  “who has brought fame to Kishi,” and to show gratitude to the people-oriented Governor of Oyo State, ‘Seyi Makinde, who made it possible for a Kishi indigene to become Deputy Governor and for an Oke Ogun son to become an acting Governor, a feat that was first of its kind in the state.

In what would qualify as a triumphant entry, Barr. Lawal was, on Thursday, 22 September, received into Kishi by a mammoth crowd, who sang the praises of Governor Makinde and congratulated the Deputy Governor on his elevation from being Chairman of the Oyo State Housing Corporation to being deputy governor and running mate to the Governor for the 2023 Governorship Election in the State.

Students, civil servants, artisans, traders and members of different socio-cultural groups had lined on the streets to welcome Kishi’s worthy son home. And, like a worthy Yoruba son brought up with the ethos of Omoluabi, the Deputy Governor headed straight for the palace of the Iba of Kishi, where he paid homage to the foremost traditional ruler and the father of Kishi kingdom.

Speaking at theIba’s palace, Lawal offered his appreciation to God and to Governor Makinde, who he said counted him worthy of the position of deputy governor and running mate for the 2023 governor election.

He maintained that his elevation, which he described as a call to service, was unexpected, as according to him, “I had only focused on making my own little contributions to the government through the Oyo State Housing Corporation, not knowing that the governor was watching.”

He equally appreciated the Iba of Kishi, the KPU and all sons and daughters of Oke Ogun, calling on them to rally behind Governor Makinde for the success of the incumbent administration in the state and its victory in the 2023 general elections.

Responding, Iba of Kishi, Oba Oyekola, assured the deputy governor of the support and cooperation of the people of Kishi to the current administration in order for it to succeed, while he also prayed for continued peace and progress in the state as well as for the electoral success for the Governor Makinde/Barr. Lawal governorship ticket.

On Friday, Lawal and his entourage shifted their focus to paying homage to Allah SWT, worshipping at the Kishi Central Mosque.

In his speech at the Jumat, Lawal admonished the Muslim Ummah on the need to continue to support good governance in Oyo State.

In his sermon at the Jumat, the Chief Imam of Kisi, Alhaji Soliu Danbaba, had eulogised Lawal and assured him of the support of the Muslim community in the town.

But all these activities had only set the template for what was to come at the grand reception slated for Saturday.

From early morning on Saturday, the historical town had begun to receive dignitaries from all over the state and beyond, as well-wishers came in hundreds to witness how Kishi would give the garlands to one of their own.

Top functionaries in the government of Oyo State, including the deputy Chief of Staff to Governor Makinde, Chief Ademola Ojo; chairman, Oyo State Advisory Committee, Senator Hosea Agboola (Alleluyah), who represented the Oyo North Senatorial District at the Senate between 2011 and 2015; Commissioner for Environment, Okunrinjeje Abiodun Oni and many of his colleagues, top civil servants and other appointees of the governor had converged on the historical town.

Foremost traditional rulers from all corners of the state, chairmen of local governments and politicians from across different party divides, were also attracted to Kishi to celebrate the former Commissioner for Justice, who many said has always been a champion of development and growth for the historical town of Kishi and Oke Ogun area.

Speaking at the event, representative of the Governor and Deputy Chief of Staff to Governor Makinde, Hon. Ademola Ojo, described the Deputy Governor as a responsible, humble and loyal personality.

Ojo had also tickled the fancy of everyone in attendance by declaring to the admiration of the massive crowd, on behalf of the Governor, that Oke Ogun zone has not seen anything yet in terms of development and good governance.

The former Oyo State ALGON chairman equally rallied for the continued support of the people, especially ahead of the forthcoming general elections, stating that candidates of the Peoples Democratic Party (PDP) should be supported to win all positions in order to hasten the pace of development currently ongoing in the state under Governor Makinde’s watch.

Wife of the Governor, Engr. Tamunominini Olufunke Makinde, who was represented by the Permanent Secretary of the Ministry of Women Affairs, Mrs. Grace Oderinde, also described Lawal as the pride of Oke Ogun.

Explaining the rationale behind the reception, the National President of the Kisi Progressive Union, Chief Bayo Adesope, maintained that the event was put together to honour Kishi’s illustrious son, “who has brought fame and honour to Kisiland.”

Speaker after speaker adulated the Deputy Governor, but they all reserved the greatest laudations for the Governor of Oyo State, whose revolutionary leadership, they said, has redefined governance in the state and the entire country, noting without mincing words, that Oyo State has been transformed by the governor in just three years and some months.

Okere of Saki, Oba Khalid Olabisi; former deputy governor of Oyo State, Chief Hamidu Gbadamosi, former Secretary to the State Government and Babalaje of Sakiland, Chief Michael Koleoso, spoke the minds of Oke Ogun people, when they all lauded Governor Makinde for appointing Lawal as his deputy and nominating him as his running mate.

The Okere of Saki, who described Lawal as an Omoluabi and an embodiment of the values of an ideal OkeOgun man, equally called on residents of the 10 local governments making up the zone to repay Makinde administration’s efforts in developing the zone.

In what would be a major highlight of the epoch-making event, the Olugbon of Orile-Igbon, Oba Francis Olusola Alao, reaffirmed the position of Oyo State Traditional Council to back Governor Makinde for another term in office, going full-blast on why the royal fathers took such a decision.

According to Oba Alao, though there is a general economic downturn across the country, with an attendant paucity of funds, Governor Makinde has proved, in under four years, that government can work in people’s interest.

He declared: “I have a moral right to say it boldly. This government has done very well. Go to every zone of the state, you will see the effect of good governance being provided by the governor.

“We all know that there is paucity of resources worldwide, but this government has proven to us all that governance should be about the people and not about individual gains.

“Those opposing this governor are doing so because, according to them, he does not make money available to politicians. But if he does not give money to individuals but does everything possible to make life more meaningful for the generality of the people in the state, shouldn’t we all commend the governor?

“For Governor Makinde, governance is not about him, his deputy or politicians, it is about the interest of the people.

“So, I am saying it here today, go ahead and vote for Seyi Makinde/Bayo Lawal, because they have shown that good governance is possible and that governance is about the state.”

In his response, the deputy governor appreciated Governor Makinde, promising to put in his best in supporting him to bring the the much-needed dividends of democracy to the people of Oyo State.

He equally assured that the government being led by Governor Makinde places much priority on the development of Oke Ogun zone and all zones of the state, as evidenced by some of its people-oriented projects spread across the state, declaring that the administration would not relent in providing good governance.

While appreciating the Iba of Kishi, the KPU and the entire people of Oke Ogun, Lawal charged them to continue to support the Makinde-led administration for it to achieved the desired transformation of the state.

He also made a strong case for the re-election of the PDP-led government in the state, explaining that residents of Oke Ogun would prove that they want more developments in the zone by re-electing Governor Makinde and also supporting PDP candidates in all elections.

•Moses Alao is a Special Assistance (Print Media) to the Governor of Oyo state.