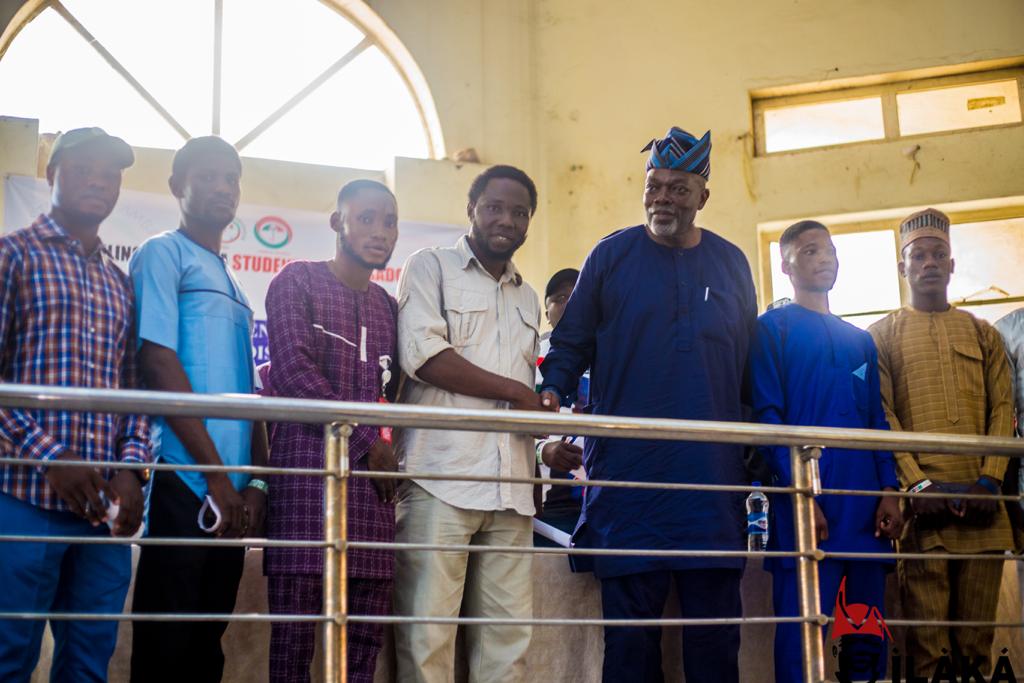 The event which took place at Atiba Town Hall in Oyo, had in attendance over 4,000 students and their coordinators, PDP Party Chairmen, Local government Chairmen, PDP candidates in Oyo federal constituency, Students Union Presidents, Indigenous association presidents and several others.

He said; “As a students we need to wake up to this clarion call of building a new and better Nigeria, is not enough to be a social media crusader of change, we must integrate ourselves and be a partner in the process of making Nigeria new, enough of seating on the fence, we must be practically involved, that’s why we are here today to make history, this is first of it’s kind, let’s appreciate Chief Bisi Ilaka for having the students in mind and placing our needs as priority in his struggle”

“Chief Bisi Ilaka has shown that some leader can be trusted if given opportunity to serve, Abraham Lincoln would have Chief in mind when he said this and I quote; Gold is good in it place, but loving, brave and patriotic men are better than gold, I can tell you without any doubt here that Chief Bisi Ilaka is a loving, brave and patriotic man and he is better than Gold. He is going to make a good distinguished Senator come February 23rd, 2023 in God’s Name”.

Olalere, added that nothing moves until there is a mover, nothing changes until there is a changer, we must make move now to make a new thing happen to Oyo Central and Oyo State. Oyo Central need good representation, several personality have been representing Oyo Central over the years and they have contributed their quota, it’s now time to make good representation that will bring a total liberation in Governance to all, that is why the movement has been code named “ANFANI FOR ALL”.

He further reiterated that it is time to elect leaders with technical knowledge about good governance, who by experience over years has place them on the good pedestal of knowledge, those that are passionate about a better society for common man, those that have the interest of Nigerian Students at heart, people like Chief Bisi Ilaka, Engr Seyi Makinde, the executive Governor of Oyo state and Alhaji Atiku Abubakar

In their good will messages, the chairman of the occasion, Hon. Sakiru Ojo representing Rt. Hon Wale Atilola and Oyo East/West state assembly candidate Hon. Olorunpoto Rahmon appreciate the students body for their great move and convictions to converge themselves for Chief Bisi Ilaka and all PDP candidates, having understand that former Oyo Chief of Staff is a replica of Omoluabi doctrine and his service to Oyo central before his aspiration. they tasked students to intensify more efforts on their issue based campaign that will.bring total liberation to all and return Ilaka elect to the Red Chamber.

In his remarks, the Oyo born politician, Chief Bisi Ilaka commended the students for pitching tent with him through their campaign movement tagged ” Bisi Ilaka Students Ambassador (BISA)”. He charged them to campaign around their Universities, Polytechnic and Colleges of education, engaged their fellow students, lecturers on the need to vote all PDP candidates and its intent to rescue the nation from current mess, adding that its is time to change the CHANGE.

Ilaka charged the students coordinators to.be committed with strong determination to secure a landslide victory across board. Stressing that he’s in race to transform Oyo Central and recreate a future for the current and unborn generation.

The events also featured comments, reactions and inauguration of Students coordinators across higher institution of learning in Oyo central.

Others are; All PDP party chairmen in Oyo federal constituency, women leaders and several others.