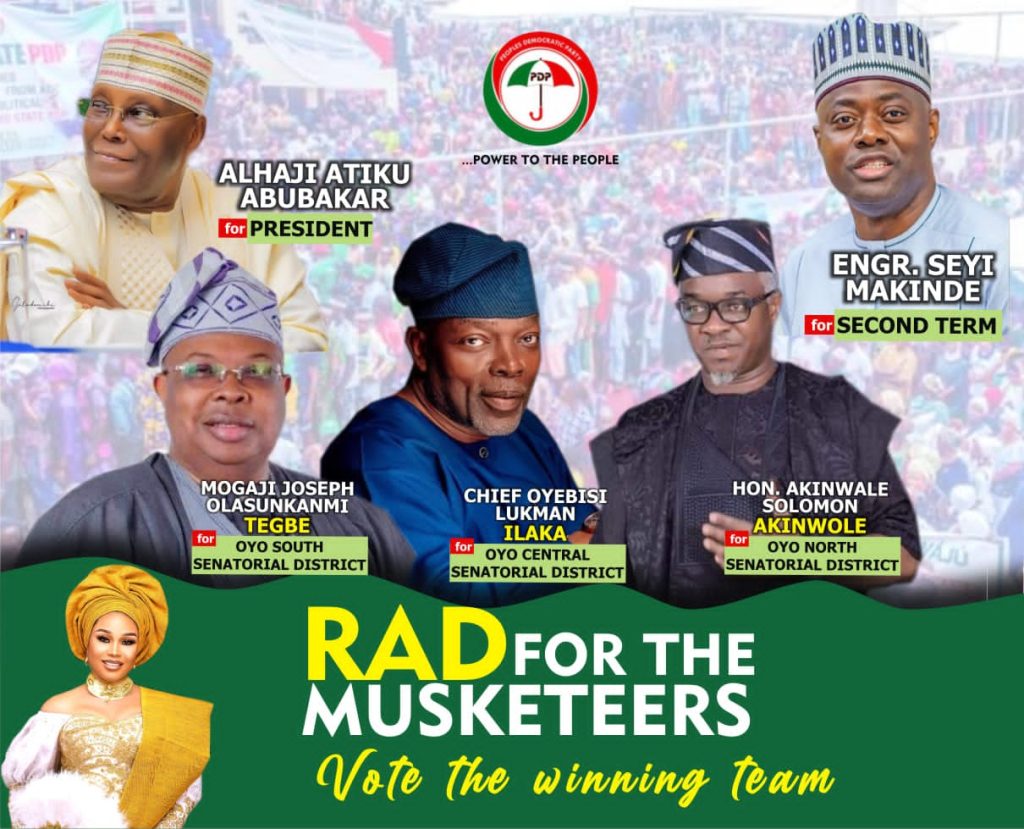 Setting the records straight, this is going to be almost the first ever combo Love between aspirant and Candidate in the same party coming together to become one big family.

Since the primary Elections as come and gone, the former House of Representatives aspirant in Akinyele/Lagelu Federal Constituency, Hon. Ramata Agberemi Dabo ( RAD) had taken the bull by the horn immediately after the successful primary Election that produced her closest Ally, Hon. Adeaga Abideen Adetokunbo by declaring her unwavering support towards the general elections.

Meanwhile, as God will have it, “Sayeth thou to a man diligent in his works, shall stand before Kings and not mean men”. While the Party PDP at the National level were compiling list for Atiku/Okowa Campaign Council 2023, Hon Ramata’s name featured in the list as member upon which our star boy in SW Zone, Oyo State, His Excellency Engr. Seyi Makinde FNSE, The Executive Governor of Oyo State was appointed as the Deputy South in the campaign Council.

While speaking with journalist in Ibadan yesterday, She said, We cannot but support, promote, encourage our Candidates in the party PDP that will deliver good Governance Good Politics and Policies that brings Democracy to the Grassroots during the forthcoming 2023 General Elections especially the three musketeers, Oyo South, Oyo North and Oyo Central Senatorial Districts Candidates. I have taken a move with my team to tour round our people and give them maximum support in any ways as required.

Speaking further, She said, if we try all our best to achieve the big goal ahead of us, our people will enjoy and be well represented beyond reasonable doubt. I am calling on our party Members, faithful to go out there and lend their own little hands of support and encouragement towards their Candidates eg stickers, fliers, caps, vest etc as it goes a long way she concluded.

She did accounted that, as part of her moves and quota, she had visited the Senatorial Candidate, House of Representatives and State House of Assembly Candidates and still ongoing untill we all achieve the hundred percent mandate assured by our Great Leader, Exceptional Inspirational Educationist His Excellency The Executive Governor of Oyo State, Engr. Seyi Makinde.

Finally, we are hopeful that, from top to bottom, Presidential Candidate PDP, His Excellency, Alh. Atiku Abubakar, Former Vice President of the Federal Republic of Nigeria, Waziri of Adamawa, GCON, H.E Dr. Ifeanyi Okowa agenda is a reality as well our Good Governor, Engr. Seyi Makinde FNSE 4+4=8 she assures.