You Are On Your Own – Oyo PDP Leaders Berates Makinde, Declare Support For Atiku 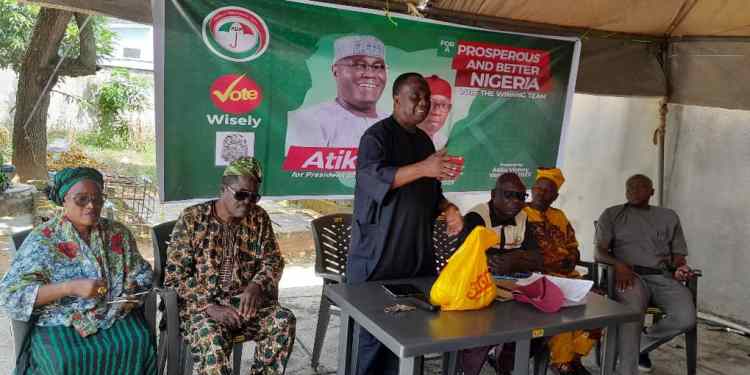 Chances of the Presidential candidate of the People’s Democratic Party (PDP), Alhaji Abubakar Atiku got a boost in Ibadan, the Oyo state capital on Wednesday as the leaders and stakeholders of the party disagreed with Governor Seyi Makinde on his stand against Atiku, saying Makinde was only speaking for himself but not for the generality of the party members, leaders and stakeholders.

Governor Makinde had on Satuday during a live radio programme said himself and other aggrieved PDP governors would not work for the presidential candidate of the party for some reasons.

Makinde had on the radio programme said a northerner cannot complete eight years tenure and also return power to the North for Alhaji Atiku Abubakar to take over. He also argued that the national chairman of the party cannot come from the North and the presidential candidate also emerge from the North.

But speaking at an emergency meeting of the leaders of the party from the 33 local government area of the state, the former minister of Mines and Steel Development, Elder Wole Oyelese and a foremost leader of the party, Engr. Femi Babalola in their separate remarks said Makinde was not speaking for the party in the state but speaking for himself.

He said PDP leaders would work and deliver the state for the presidential candidate of the party, Alhaji Atiku Abubakar in 2023.

According to Oyelese, “a good politician would not speak like that. For makinde to say he would not work for Atiku doesn’t mean anything. He is on his own! It is an empty threat! If he said we should not vote for Atiku, who are we voting for?

“We are too sophisticated for that in Oyo state. Makinde is a new comer in Oyo state politics but we shall continue to work for our party. However, we are working for Atiku in a special way. My advise for any politician who wants to win in oyo state is to come to mainstream. Mainstream is the leadership of the party in the state.

“What is the position of Yoruba on this matter that Makinde is talking about? We don’t have a position. Baba Fasoranti is saying something and Baba Adebanjo is saying another thing. We are not having a position in Yoruba land. Our members remain steadfast and committed. This is our party and we cannot allow it to breakdown.”

Also speaking, a foremost party leader, Engr. Femi Babalola popularly know as Jogor, said the governor is also guilty of the points he raised against the presidential candidate, Abubakar Atiku.

According to him, “He that comes to equity must come with clean hands. As an Engineer, I analyse issues. The first question I asked myself was, is it good for a northerner to take over from a northerner? And another question is that is it gpod for an Ibadan man to take over from Ibadan man that spent eight years? So, for Makinde that benefited from such, why is he now antagonising another person? He didn’t see anything that is wrong in that but when it is Atiku, it is wrong.

“We are for Atiku and we are for the PDP, you can see leaders and stakeholders across the 33 local governments here, and we are all ready to win Oyo state for our presidential candidate”.