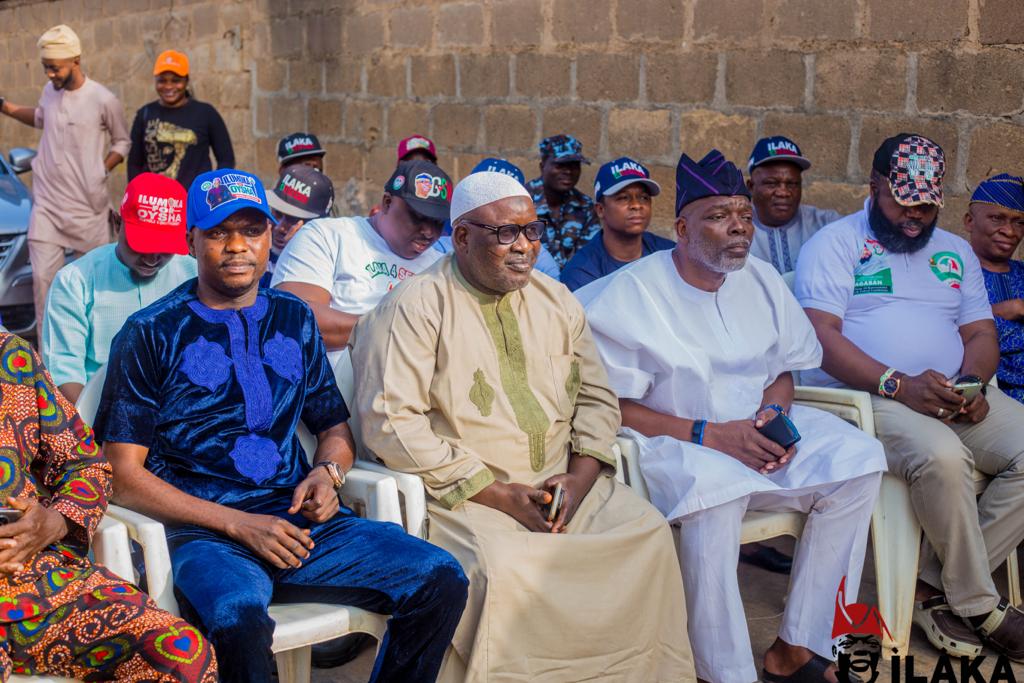 The People’s Democratic Party candidate for Oyo Central Senatorial district, yesterday assured the landlord association of Aiyegun Oleyo community in Oluyole federal constituency of a better representation that will bring the dividend of democracy to their door step.

He made this remarks at a meeting he held with members of the association at the residence of the Baale of Oleyo Alhajj Olajide Kabiru.

The Oyo born politician noted, that he will not disappoint them, stressing that his persistence in seeking to represent Oyo Central Senatorial district is because the district has invariably suffered from poor representation at the Red Chamber, while seeking their votes and support Ilaka
thanked the Baale who has given him and other PDP candidates the opportunity to meet with the leadership of the community, stressing that it’s because the Baale can guaranty that they will fulfil their electoral promises, he commended Alhaji Kabiru for the trust he has in him and other PDP candidates.

Earlier, the general chairman of the Aiyegun Oleyo community Adetunji Alabi while welcoming Ilaka and his entourage, said in his remarks that since he assumed office about ten years ago, Ilaka is the first Senatorial Candidate who will visit them and hopes that he will continue with the gesture when he assumes office. He solicited the support of the state government in fixing the Aiyegun/Oleyo road which he described as a very important road to the community. He commended the PDP House of Representatives candidate for Oluyole federal constituency Abdulmojeed Mogbonjubola for his immense effort towards ensuring that the Aiyegun Oleyo road is rehabilitated.

The Publicity Secretary of the People’s Democratic Party Oyo State and the Bisi Ilaka coordinator for Oluyole federal constituency, Engr. Akeem Olatunji gave assurances that the Aiyegun Oleyo road will be fixed very soon, while he called on the leadership of the community to not only vote for all PDP candidates across board in the coming elections, but also charge their people to do same.

Similarly, Hon. Mogbonjubola in his comments applauded the General Chairman of Aiyegun Oleyo who oversees the over 70 neighborhoods that made up the community, for his commitment to the development of the district. He maintained that reconstruction of the road has been awarded and it will be fixed before the end of the first term of governor Seyi Makinde. He stated further that he has gotten the assurances from the governor that the road will be fixed

Alhaji Olajide Kabiru, Baale Aiyegun Oleyo community prayed for the success of Chief Bisi Ilaka and other PDP candidates in the coming elections, and charged them to fulfil their electoral promises after their victory at the ballots.