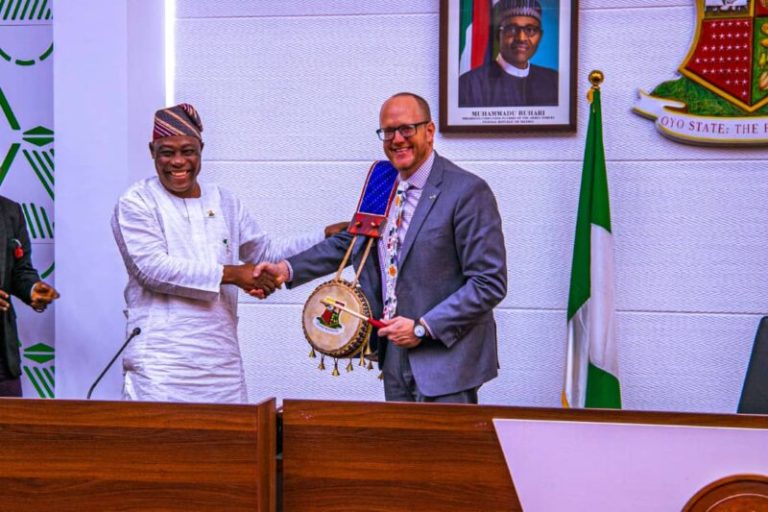 The Oyo State Governor, ‘Seyi Makinde on Monday assured that his administration is open to a partnership with the United States of America in agriculture, health and security sectors, to move the state forward and better the lives of the citizens.

The governor stated this while receiving the new United States Consul General, Mr Williams Stevens, who paid him a courtesy visit at the Executive Council Chamber of the Governor’s Office, Ibadan.

He noted that Oyo State will strengthen its partnership with the United States to deepen a mutually-beneficial relationship on security, business, entertainment, technology and good governance, among others.

A statement by the Chief Press Secretary to Governor Makinde, Mr Taiwo Adisa, indicated that the governor was represented by his Deputy, Barr. Abdulroheem Bayo Lawal.

According to the governor, the Oyo State government is looking forward to using the opportunities and mutually-beneficial partnerships between the state and the United States to better the lives of Oyo State residents and create an atmosphere where businesses can thrive.

“Oyo State, under this administration, has four major pillars; Health, Security, Education and Economic expansion through Agribusiness and I am happy that even if you put us on a scale of measurement, we have scored more than 70 per cent.

“We place a high premium on agriculture. We also have a comparative advantage in land capital. So, there is no amount of enterprise on land that we cannot accommodate.

“Also, for us here, we know security is key and we have deployed a greater percentage of resources into security development. We have put in place, since the inception of this administration, an outfit called Amotekun. It will complement the efforts of our conventional security outfits – Police, DSS and others that are national.

“Amotekun is domesticated, localised and goes into the nooks and crannies of our communities to ensure our environments are safe.

“You must be aware while coming that people are talking about banditry, and kidnapping along the stretch of Lagos-Ibadan Expressway. But Oyo and Ogun State governments are putting arrangements in place to ensure that the stretch of the road is safe. As we speak, I can assure everyone here that the corridor is fully being secured by the collaborative efforts of the states involved”, he added.

The governor equally commended the United States for its efforts in fighting HIV, stating that Oyo State has been working hard to reduce the prevalence of the virus.

“We need to commend your efforts in the area of HIV, which to us in Oyo State, is one focal point and our Ministry of Health has been working assiduously to reduce the prevalence of the virus. Right now, the state has been able to reach only 41 per cent of children while that of adults stands at 77 per cent.

“For the agric value chain, we have put in place various projects to expand the economy and only about three weeks ago, we were in Abuja and we observed that most of the things we have been doing are what they just started over there.

“The SAPz, which is just being introduced at the national level, has been embarked on a long time ago in Oyo State and we have started the agric value chain at Fashola.

“We have been able to expand the scope and value for agribusiness.

“As we speak, we have, because of the seriousness we attach to agric in the state, attracted a lot of international funding, which we believe will expand our economy in due course.

“But we must give it to you that if you choose to assist, you can be deliberate and we will encourage you to assist and partner with the Oyo State government in the area of security. It is becoming endemic.

“Initially, we thought we can localise this issue of security, but it has become a hydra-headed phenomenon. So, whatever technology is required to combat insecurity in Nigeria, particularly in Oyo State, we will welcome it.

“You spoke of the forthcoming election, and I can assure you that it will be peaceful and credible,” the governor added.

In the meantime, the United States Consul-General, Stevens, stated in his remarks that his country was ready to strengthen economic ties and bilateral commerce, collaborate with Oyo State to fight crime, and prioritise projects related to agriculture, health, and security, among other areas.

He praised the government of Oyo State for setting the pace in the areas of healthcare delivery, among others, adding that the state’s parameters on HIV prevalence are already ahead of some countries.

Stevens added that the United States will partner with Oyo State and the Federal Government in combating transnational crimes and ensuring the security of the lives and properties of residents, which according to him is key to creating a conducive environment for businesses to thrive.

He said: “We are focused on security. We are focused on ensuring that we are working together with Nigerian organisations and law enforcement to combat international crime and help the environment here to be safer and more secure, which directly connects to trade investment.

“We are also focusing on the human concept of regulations, health, partnership, democracy, governance, preparation for the upcoming elections; everything we can do to ensure that people who are here in Oyo State and around Nigeria can have the opportunity to live healthy and safer”, he added.