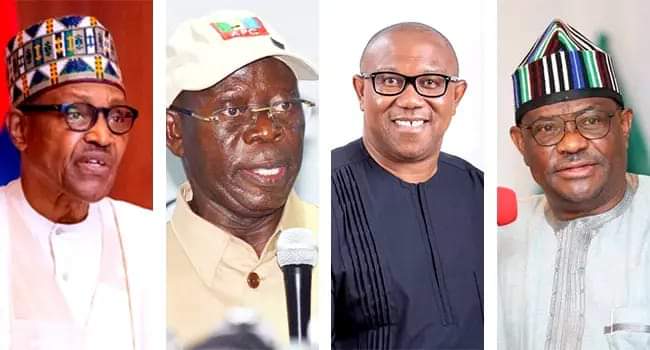 The commissioning has been scheduled as a week-long programme commencing today Monday, November 14, and expected to end on Friday, November 18, 2022.

Oshiomhole is expected to commission the Rumuepirikom Flyover in Obio-Akpor on Wednesday while Obi will inaugurate the Nkpolu-Oroworokwo Flyover on Thursday in Port Harcourt, the state capital.

Aside from Buhari and Oshiomole, Wike also invited the LP’s presidential candidate, Peter Obi; and Emir of Kano, HRH Aminu Ado Bayero for the the project commissioning.

The monarch is scheduled to inaugurate the Dr Peter Odili Cancer and Cardiovascular Disease Diagnostic and Treatment Centre in the Obio-Akpor Local Government Area of Rivers on Monday.

Recall that this is not the first time Wike will be inviting stalwarts of the opposition party to commission projects in Rivers.

Also, in October, Wike was invited by the Lagos State Government to a women’s conference, where he endorsed APC’s Sanwo-Olu for second term.

The Rivers governor and four other PDP governors known as the G5 have demanded the resignation of Iyorchia Ayu, saying northerners should not be the PDP national chairman and presidential candidate.

But, Ayu, a Benue indigene, has insisted that he won’t step down till the end of his four-year tenure, even as the G5 made his resignation a precondition to support Adamawa-born Atiku Abubakar’s 2023 presidential ambition.

Recall also that Wike and his allies have not been seen at the campaigns of the PDP’s presidential candidate, Abubakar Atiku.