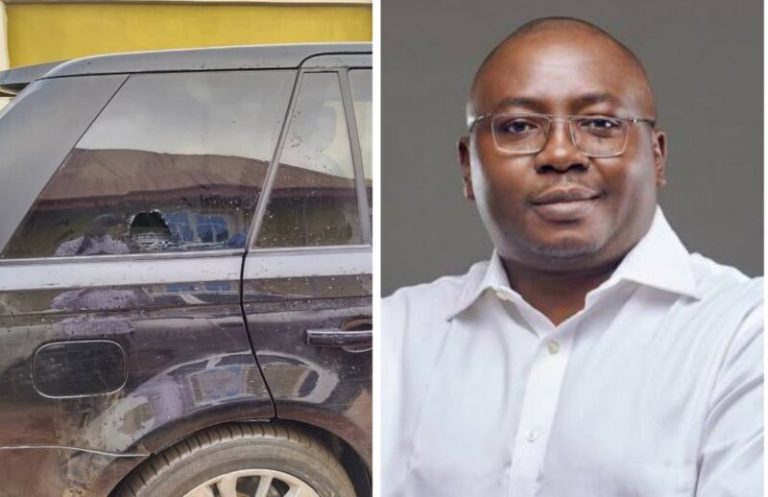 The campaign team of the gubernatorial candidate of the Accord Party, Chief Adebayo Adelabu was on Wednesday attacked by thugs suspected to be working for the political rival, All Progressives Congress (APC) in Tede, Atisbo Local Government area of Oke–Ogun.

Three of the suspected thugs who claimed to be agents of the All Progressives Congress (APC), were arrested due to the quick intervention of men of the Nigeria Police and private security guards in the entourage of the governorship candidate before further damage could be wrought on the convoy. However, several vehicles were destroyed during the attacks.

Earlier in the week, the Accord governorship candidate had raised the alarm, over plans by the opposition political parties to attack the Accord candidates in the state.

Chief Adelabu had urged fellow contenders to make their campaign issue-based rather than turn the state into a war zone in the build-up to the general election.

In the attack, two of Chief Adelabu’s vehicles were destroyed and five other campaign vehicles, including the SUV of a popular Yoruba movie actor and producer, Mr Soji Taiwo known as “Ose Ose Omo Banke”, were destroyed.

Reacting to the incident, the campaign organisation noted that the opposition APC and the Peoples Democratic Party (PDP) have become uncomfortable and are threatened by the rising profile of the Accord Party and its governorship candidate, who continues to garner overwhelming support as he continues his state-wide consultation.

Meanwhile, monarchs in Itesiwaju Local Government, Oke–Ogun have pledged support for the governorship ambition of the Accord Party candidate.

They pledged during the ongoing state-wide consultation meetings with relevant stakeholders in the zone.

In the meantime, the royal fathers who met with the Accord candidate were Oniro of Otu, Oba Sunday Oyetunde Adepoju; Olugbo of Igbojaye, Oba Oladimeji; Olokaka of Okaka, Oba Olatunji Azeez; Eleyinpo of Ipapo, Olugunwa of Okeamu, Oniro of Komu, Olonko Babaode and many others.

The monarchs solicited the support of Chief Adelabu in bringing needed development to Itesiwaju Local Government when he becomes the governor of Oyo State after the general election.

According to the monarchs, the council area lacks basic amenities such as good roads, hospitals and a bank to serve the need of the people, adding that the previous administration had neglected the area despite several complaints. They also reiterated their commitment to giving unflinching support to the governorship aspiration of Chief Adelabu in the election.

Responding, Chief Adelabu expressed his appreciation to the monarchs for their support.

He said that his administration would focus on an autonomous and functional local government administration system which is the panacea for rapid and profound development at the grassroots, including adequate welfare of the monarchs and chiefs in the communities.

”My governorship ambition is to serve the people of the state and not for personal purpose. I, therefore, solicit your support towards the actualisation of becoming the next governor of Oyo State to touch lives positively and move the state from poverty to prosperity”, Adelabu said.