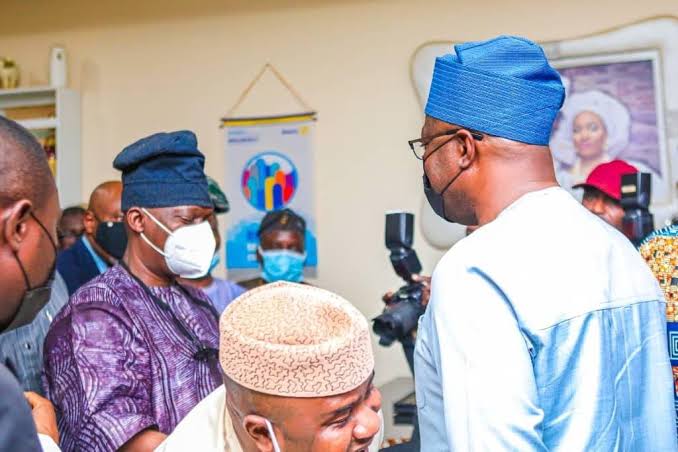 ….demands immediate arrest of Teslim Folarin by the police for interrogation and possible prosecution.

The ruling People’s Democratic Party (PDP) in Oyo state has lampooned one of the opposition parties in the state, the All Progressives Congress (APC) over a statement yesterday where it criticized the Seyi Makinde led administration over what the opposition party called ‘improper handling of security matters’.

This was as the ruling PDP in Oyo insists that election is not war and should be seen as a political game instead of the do or die approach by the All Progressives Congress (APC) even as the PDP demand the immediate arrest of APC 2023 guber candidate, Senator Teslim Folarin, over alleged assassination attempts on serving House of Representatives member, Honourable Shina Peller and the Bayo Adelabu both of the Accord, a political party in the 2023 race.

The ruling PDP also expressed shock at how the APC in Oyo state was always quick to “shamelessly rush to the media to cry like a little baby crying for her mother’s breasts milk” over it’s party’s monumental failure at the center.

A press statement by the Oyo state PDP on Friday morning made available to journalists in Ibadan by the party’s state Publicity Secretary, Akeem Olatunji, indicated that some States, which are even under APC among the six south western states in Nigeria hay been the worst hit.

Describing APC in Oyo state as a calamitous party, Oyo state PDP maintained that the opposition party in the state has continued to mock the nation’s fragile democracy like monster confident of getting away with its atrocities saying that the souls of all Nigerians killed, maimed or physically incapacitated as a result of the APC failure at the centre will hunt the party forever.

According to the ruling PDP in Oyo state, the records are there right from the word go, how Governor Seyi Makinde in collaboration with other key stakeholders championed the creation of Western Security Network codenamed Amotekun adding that Oyo state has been the highest employer of security personnel into the security outfit in the entire south west with over 1,500 already working.

The ruling party added that Governor Makinde’s procurement of over 100 fully equipped security cars with communication gadgets, Hilux vans, over 100 forest ranger Amotekun branded Hilux vans and motorbikes for Amotekun Corp among others, as well as other security support system by the Governor in order to ensure adequate security of lives and properties have culminated into the peace and tranquility being witnessed in the state.

According to APC in Oyo state, reports available at its disposal indicated that cases of organized crime and security breach have been on the increase in parts of the state in recent times residents lament over seeming helplessness of the state government and the security agencies in tackling kidnappers, armed robbers, ritual killers, political thugs among others who now strike at will and subject their victims to untold agony and pains.

“We wonder as the ruling party in the state why and how Oyo APC is so bereaved of empathy such that it continues washing its dirty and disgusting linens before our very eyes under the guise of politicking allowing shameless and callous statements out of its secretariat. And in order to conceal its failure and ineptitude of the APC federal government in providing security for the people, Oyo state APC has continued to ignore various atrocities especially in the south west particularly the Owo massacre under an APC government.

“Even the alleged Lagos-Ibadan expressway where criminal elements thought they could hibernate after being flushed out of Oyo state is now secured with the cooperation of both Oyo and Ogun state police commands with the support of the Oyo state Amotekun Corp and local vigilante group as well as other organized non state actors. APC in Oyo state may be playing politics with its endless lies and mischievous cry in the media but they can not fool the now wiser people of Oyo state for another time, the earlier they realize that singular fact, the better for them.

“We understand we are in another political season when APC in the state will be all out to do what it knows how to do best; tell lies, more lies, and greater lies until the unsuspecting members of the public confused the lies as true. Of course it is a political campaign template which worked out well for them prior to the 2011 election but they’re still living in the illusion of self denial of the fact that the good people of Oyo state are now wiser having seen the tragedy and calamity brought upon the state by the APC for 8 interrupted years.

“It was an era in our collective history as a people in Oyo state that is now been referred to as the dark era. An era filled with monumental corruption by the APC government, an era filled with avoidable and needless killings of innocent civil servants and even our aged retirees and pensioners who just wanted what rightfully belonged to them. The APC government sent innocent lives to the great beyond because of sheer wickedness political grandstanding believing in its mischievous power of propagating falsehood to force its satanic narratives on the public, that era must never be experienced again.

“Nobody’s political ambition is worth a drop of blood of any resident in Oyo state therefore, Oyo state APC, particularly, its governorship candidate, must thread with absolute caution as the opposition party continues to allow its desperation advance beyond boiling point thereby, constituting a threat to our democratic development as a state. If they realized that power is ephemeral and transient, they would have placed the people at the center of all they did for 8 uninterrupted years but it is too late now for them to cry because the same people they took for granted have condemned them to political obscurity.

“The fresh assassination attempt on Bayo Adelabu in Oke-ogun on Thursday, among previous attacks carried out by the APC agents of darkness including the initial assassination attempt on a federal lawmaker, Honourable Shina Peller in Iseyin justifies and reaffirms our continuous concerns and appeal to the state Commissioner of Police, CP Adebowale Williams, to urgently beam security searchlights on the APC and its governorship candidate before Teslim Folarin’s turned Oyo state to a theater of political war because the persons you attacked will not place their heads on the table for him to chop off to feel better about his untamed desperation.” The Oyo state PDP stated.

Reacting to allegations of unemployment by the present government in Oyo state, the PDP said, the allegation by the opposition party was nothing short of laughable stressing that the over ten thousand employment of youths including people living with physical disabilities into the state civil service by Governor Seyi Makinde within 3 years surpasses the entire recruitment carried out in the entire 8 uninterrupted years of APC administration.

“The last APC government in Oyo state for no justifiable reason, and despite the humongous available resources at its disposal then, still owed workers salaries, pensions, gratuities to over 12 months leaving many innocent people in the cold hands of death while others who survived the dark era were physically incapacitated. All of the unpardonable atrocities committed by the APC government have since been cleaned up by Governor Makinde’s purposeful and proactive leadership across all sectors.

“Just yesterday, another milestone was achieved by the Makinde led administration when the Governor conducted a groundbreaking for the construction of a gas project in the state. That project alone will create hundreds of jobs for the people. This is how you grow an economy devoid of capital flight. Oyo state money stays in Oyo state and recycle within the state’s economy. Seyi Makinde is the grandmaster of economic management and Oyo APC is permitted to live in self denial of that hard fact out of self imposed delusion.

“When COVID-19 was at its peak, the same APC cried endlessly from all corners of the earth to force Makinde to lockdown the state but as it is with great visionary leaders, Makinde never yielded to their treacherous noise and afterwards, other APC states including the APC led federal government adopted Makinde’s partial lockdown as the best making Oyo state under Makinde a leading example of what proactive governance and leadership should be. The primary goal of the APC in Oyo state is to distract Makinde but they must wait till the end of 2027 for their pipe-smoked dream to come to fruition if they’ll have a chance because no vacancy for now.