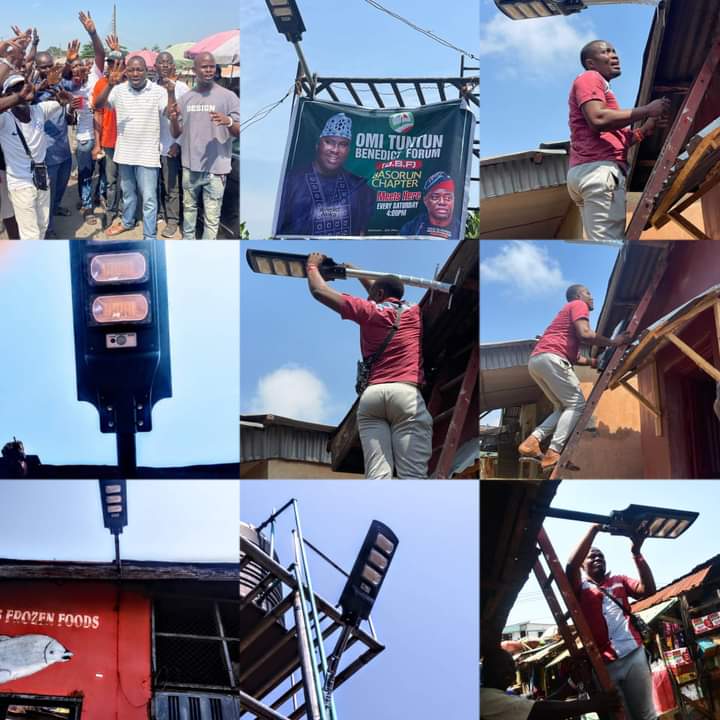 According to Oloye Akika, his foundation, OMITUNTUN BENEDICT FORUM, Bashorun chapter began the Installation of the street lights at the market this Monday after the leadership of the market sought his help for solar lights last week Friday.

At the commencement of the project, while fulfilling the promise made to the market traders, Oloye Akika said the project would enhance security and tackle socio-economic challenges of the people considering the importance of light to human and societal development.

He noted that security and expansion of the economy are among the four cardinal points agenda of the Governor Seyi Makinde led administration has contained in his Roadmap for Accelerated Development, 2019-2023.

“I have decided to install the street lights in this market in order to reduce the security challenge and boost the socioeconomic activities of the market and it environs.”

“This is not the first laudable project OMITUNTUN BENEDICT FORUM has embarked upon in Ibadan Northeast Local government, we have carried out free medical outreach held at Abayomi, Olagoke Akano Street, thousands of residents benefitted from the outreach, we paid medical bills of those battling with chronic diseases, we have done mega empowerment programmes for residents where grinding machines, sewing machines, deep freezers among other equipment distributed to residents.

He solicited for continued support and prayers from all and sundry to enable his principal, Governor Seyi Makinde to succeed in the 2023 general elections.

Speaking on behalf of the traders, Oloye Ibraheem Kolawole Balogun who is the Babaloja of Ibadan Northeast Local Government, said Governor Seyi Makinde stood out among the governorship contenders, because of his deep understanding of the local economy, private sector background, and track record as governor in the last three and half years.

“We have endorsed Seyi Makinde for second term, he is our own, a friend of the masses. He didn’t close down our market during COVID-19 pandemic.

He added that Makinde is better placed to sustain the economy with regular payment of workers’ salaries that has direct positive effects on traders.

On her part, Iyaloja of the market, Alhaja Silifat Iyaniwura urged all the traders who were yet to get their Permanent Voter Cards (PVCs) to do so on time as saying that’s the only way to vote for Governor Seyi Makinde and other PDP candidates in the forthcoming elections.

Why reiterating the positions of Babaloja and Iyaloja, the secretary of the market, Mr Adewale Abubakar said the other governorship candidates should not bother coming to the market for campaign stating that Oloye Benedict Akika has secured the market for Governor Seyi Makinde.

Also speaking, the Youth Leader of Bashorun in Ibadan Northeast Local Government, Ayobami Adeyemi stated that the youths are pleased with the performance of Governor Seyi Makinde in terms of employment and empowerment opportunities for the teeming youths.

He added that the youths in the local government will mobilized in their thousands to ensure the re-election of Governor Seyi Makinde in 2023.