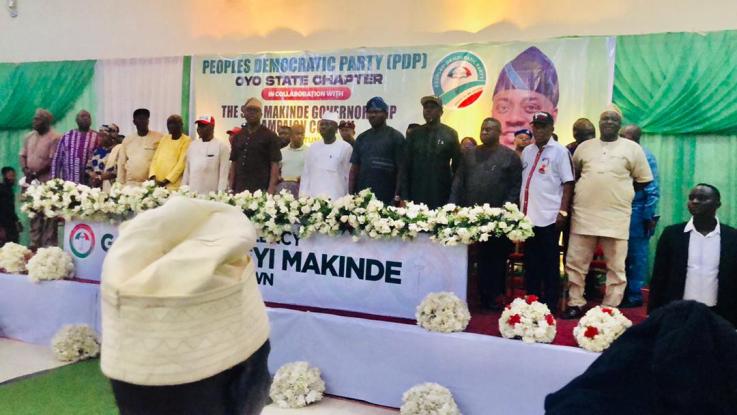 The governor of Oyo state, “Seyi Makinde,” has now complied with his prior commitment to all PDP aspirants to reimburse their money to obtained nomination forms during the party primary election.

The governor also committed to releasing N10 million to the 33 local governments commencing at month’s end.

The information was revealed on Tuesday at an event hosted by the Oyo State Chapter of the Peoples Democratic Party in collaboration with Seyi Makinde Governorship Campaign Council (Omituntun 2.0) in Oyo town.

Recall that the Peoples Democratic Party in the state announced on Monday that the party’s leadership, working with the State Gubernatorial Campaign Council, would hold town hall meetings with His Excellency, Governor Seyi Makinde in each of the state’s seven geopolitical zones to kick off the campaigns.

The Zonal Meeting, which began today in the Oyo Zone, is expected to conclude on December 17, 2022, in Ibadan.

The purpose of the gathering, according to Makinde, who was warmly greeted and given a standing ovation during his remarks, is to resolve any difficulties before the general elections of 2023.

He emphasized that the meeting would be a way to address all internal issues and that leaders are ready to listen, maintaining that as a leader, they are inevitably going to make mistakes.

“We may have d challenges since we are immortal, but I can guarantee you that we are willing to hear what you have to say.

“Currently, i am a governor under PDP, and I won’t allow the well to be polluted. And those who have not yet reaped the benefits of PDP should have patience because their time will come.

Makinde urged the members to make good use of the opportunity they have now, noting that the party suffered in 2011 when it faced problems such that it didn’t have house of assembly member let alone president.

According to him, this process of engagement will continue for issues to be addressed.

However, in response to some issues being raised, Makinde stated that he will start releasing N10m to all local government chairmen and will, as promised, refund all party aspirants who picked up the nomination form during the party primaries.

He noted that his administration took the decision of N10m across the 33 LG because it had a buffer, saying that not all states could do that given the economic reality. However, in the long run, he had to stop it because some people were abusing the opportunity, and he promised that by month’s end, local government chairmen would begin receiving it back.

“Like I mentioned, how can we find a solution if an incident occurs without a buffer? You could see that we were able to respond quickly when the problem with the Akesan market arose because of buffer.

“One thing that we need to ask our chairmen is, what’s happening to their IGR in each local government. I need to let you know that allocation coming in might be dried off one day, but we need to focus”

The governor also revealed that each coordinator on his team will receive a branded bus donated by a friend to the party to use throughout the campaign, which would then be returned to the party after the election.