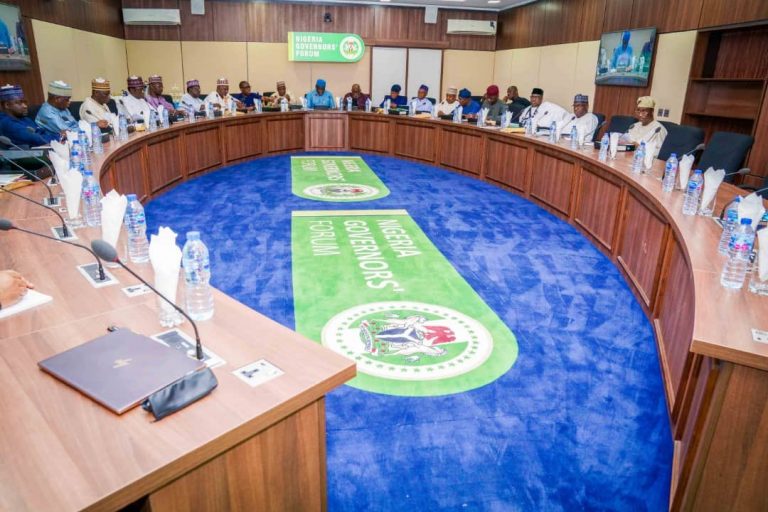 The Nigeria Governors Forum says it has stopped the planned payment of $418 million and the promissory notes issued to the Paris Club consultants by the Federal Ministry of Finance and the Debt Management Office.

The forum comprising the 36 state governors vowed to continue to explore all legal channels available to them in ensuring that ‘’resources belonging to states are not unjustly or illegally paid to a few in the guise of consultancies.’’

The governors stated this in a communiqué signed by the NGF Chairman and Sokoto State Governor, Aminu Tambuwal, issued on Wednesday after their 8th teleconference meeting which was held on Tuesday night.

But reacting to the governors’ stance, one of the consultants, Ned Nwoko, threatened to enforce the payment in a foreign court and freeze the federation accounts.

Although Nwoko did not mention the foreign country, findings show the consultants may head for France, where the secretariat of the Paris Club is located.

The Minister of Justice and Attorney-General of the Federation, Abubakar Malami, SAN, had said that the NGF had no basis to reject the proposed deductions of $418m from the federation account, noting that the governors created the liability whose payment they had also indemnified.

Briefing State House correspondents on August 11, Malami said the governors commonly agreed on the engagement of the consultants to provide certain services for them relating to the recovery of the Paris Club fund.

“When successes were recorded in the refund process, the governors collectively and individually presented a request to the Federal Government for the fund and among the components of the claim presented for the consideration of the Federal Government was the payment of these consultants that are now constituting the subject of contention,’’ the minister stated.

But rising from their Tuesday meeting, the governors expressed opposition to the move to pay the consultants despite the DMO promissory note.

The NGF in its communiqué said, ‘’We, members of the Nigeria Governors’ Forum at our meeting held today received briefings on various sub-national programmes, interventions, and issues of national importance. On these we resolved as follows:

“Regarding the controversial $418 million Paris Club refund and promissory notes issued to consultants by the Federal Ministry of Finance and the Debt Management Office, the forum remains resolute in exploring all legal channels available to it in ensuring that resources belonging to states are not unjustly or illegally paid to a few in the guise of consultancies.’’

However, he did not disclose the foreign country he would use in executing his threat.

Speaking on the development, a lawyer, Ebun-Olu Adegboruwa, said it was better for the consultants to allow the matter to be settled in the local court, adding that foreign court would likely want to await the decision of the Nigerian court.

Meanwhile, the governors’ forum said it had secured a Federal High Court order stopping the planned privatisation of the 10 National Integrated Power Projects by the Federal Government.

The NGF disclosed that the interlocutory injunction obtained by its lawyers would prevent the FG from going ahead with the sale of the power plants belonging to the Niger Delta Power Holding Company Limited owned by the FG, states and the local government councils.

Despite the opposition to the planned privatisation of the NIPP by the House of Representatives, the FG had through the Bureau of Public Enterprises commenced due diligence assessment of the 16 pre-qualified investors shortlisted for the acquisition of the plants.

The lawmakers had in a resolution directed the BPE to halt the sale of the power plants which include Alaoji (1,074MW) in Abia State; Ihovbor (451MW) in Edo State; Calabar (563MW) in Cross River State; Egbema (338 MW) in Imo State; Gbarain (225 MW) in Bayelsa State; Geregu (434 MW) in Kogi State; Olorunsogo in Ogun State; Omotosho (451 MW) in Ondo State; Omoku (225MW) in Rivers State and Sapele, Delta State.

The decision followed a motion of urgent public importance moved by the Chairman of the House Committee on Power, Magaji Aliyu (APC, Jigawa) on July 21.

Aliyu said the power assets belonged to the three tiers of government with the FG owning 47 per cent while states and local governments own 53 per cent.

But restating their opposition to the moves by the FG, the governors said, “The forum following its advocacy that the proposed privatisation of 10 National Integrated Power Projects by the Federal Government of Nigeria should be stopped, instructed its lawyers to approach the Federal High Court, which at present, has issued a court order restraining all the parties in the suit from taking any step or action that will make or render the outcome of the Motion on Notice seeking for Interlocutory Injunction nugatory.

‘’The effect of the order of the court is that Respondents cannot proceed with the proposed sale of the power plants belonging to the Niger Delta Power Holding Company Limited until the hearing and determination of the Motion on Notice for Interlocutory Injunction.’’

The restructuring, it noted, would allow states to apportion the funding from the programme for immediate response for livelihoods, assets and basic services.

The governors stated, “Members were also briefed by the World Bank Task Team Leader, Professor Foluso Okunmadewa on the desired restructuring of the $750 million Nigeria COVID-19 Action Recovery and Economic Stimulus Programme to respond to Nigeria 2022 Flood Response following discussions with states and the National Economic Council Ad hoc Committee on Flooding. The restructuring will allow states to reallocate funding from the programme for immediate response for livelihoods, assets and basic services.

“As the flood recedes, the states through the programme will be able to support the household enterprise recovery grants, short-term transfer of households displaced, labour-intensive opportunities for unskilled labour, rehabilitation of basic services infrastructure, recovery of damaged agricultural infrastructure, rehabilitation of destroyed wet markets, amongst others.’’

Sequel to the discussions between sub-sovereigns at the recently concluded second African Sub-Sovereign Government Network Conference, the forum agreed to pursue through its membership of the Forum of Regions of Africa and its partnership with the African Export-Import Bank, support for enhanced dialogue, cooperation and collaboration between sub-sovereign governments around intra-African trade, investment, industrialization and development.

The states helmsmen were equally briefed by the Senior Programme Manager, States Fiscal Transparency Accountability and Sustainability Technical Assistance Programme, Olanrewaju Ajogbasile, on the implementation progress of the SFTAS programme which is in its last phase of annual assessments.

They were also informed about the technical assistance planned and ongoing to support the sustainability of the reforms including support to ensure the states publish their 2023 budget in line with the National Chart of Account.

The NGF assured the programme of its commitment to sustain the reforms and implement recommendations that could further strengthen its public financial management systems.

It further noted that the Minister of Interior, Rauf Aregbesola briefed the forum on the congestion of the custodial centres across the country and the digitalisation of immigration processes.

‘’Members welcomed the report of the minister and committed to working with law enforcement agencies, the judiciary, and the Nigeria Immigration Service on the recommendations put forward as they relate to individual state jurisdiction,’’ the communiqué added.

It explained that the Senior Health Advisor, Dr Ahmad Abdulwahab briefed the forum on the progress with polio and routine immunization highlighting that there has been an 85 per cent reduction in the number of Circulating Vaccine-Derived PolioVirus in 2022 from 1,028 cases recorded in 2021.

The statement also disclosed that the governors were also given an update on the implementation progress of the COVID-19 Preparedness and Response Project and the recently launched Primary Health Care Leadership Challenge.

The forum reiterated its commitment to the Seattle Commitments and PHC strengthening, including the judicious use and timely release of counterpart funds where required.