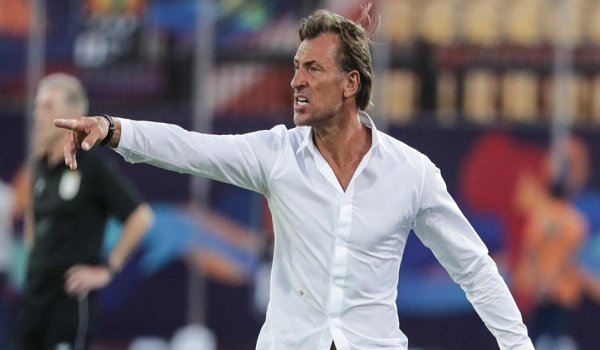 Nigeria would have long secured the services of Qatar 2022 World Cup’s coach of the moment, Herve Renard who masterminded Saudi Arabia’s best performance yet in their Mundial adventure.
The 54-year-old Frenchman on Tuesday wrought one of the greatest upsets in the history of the World Cup when he led unfashionable Saudi Arabia to a 2-1 win over favourites Argentina complete with Lionel Messi.

The shock victory by The Green Falcons reverberated globally and fuelled conversations on the Nigerian soccer scene with many faulting the leadership of the Nigeria Football Federation (NFF) for its lack of vision for not hiring the vastly-experienced manager who twice won the Africa Cup of Nations trophy with Zambia (2012) and Cote d’Ivoire (2015).

Morocco in 2016 and he qualified the Atlas Lions for the 2018 FIFA World Cup in Russia which marked North Africa’s return since France’s 1998 World Cup.

He left the Morocco job after the Atlas Lions were eliminated from the 2019 Africa Cup of Nations following a dramatic 4-1 penalty shootout loss to Squirrels of Benin in the second round of the tournament held in Egypt.

“Maybe we should have hired Renard when he wasn’t that big and experienced,” the respected administrator added.“We can’t just afford him by the time he was with Morocco. He was the highest-paid coach in Africa when he was in Morocco, earning something between €150,000 and €200,000 per month,” he said.

While the Super Eagles were stuck with Rohr post-2019 AFCON, Renard became the first Frenchman to become the manager of Saudi Arabia.

In March 2022, Renard qualified Saudi Arabia for the 2022 FIFA World Cup and in the process became the foreign-born manager with the most wins (18) in the nation’s history.

Meanwhile, despite their historic win against Argentina on Tuesday, the Saudi Arabia Gazette (SAG) reported that Renard is keeping his wards on focus for their next two crucial Group C games against Poland and Mexico.

The Saudi team will meet Poland tomorrow and then take on Mexico next Tuesday, Nov. 29.

Poland and Mexico are still regarded as favourites against Saudi Arabia despite their upset against Argentina.

Renard according to SAG, was fully aware of this reality and he is cautious about the toughness of the forthcoming matches as reflected in his comments in the post-match press conference on Tuesday.

“We made history for Saudi football and it will stay forever. This is the most important, but we also need to think about looking forward because we still have two games that are very difficult for us,” he said. “But there are still two games — or more.”