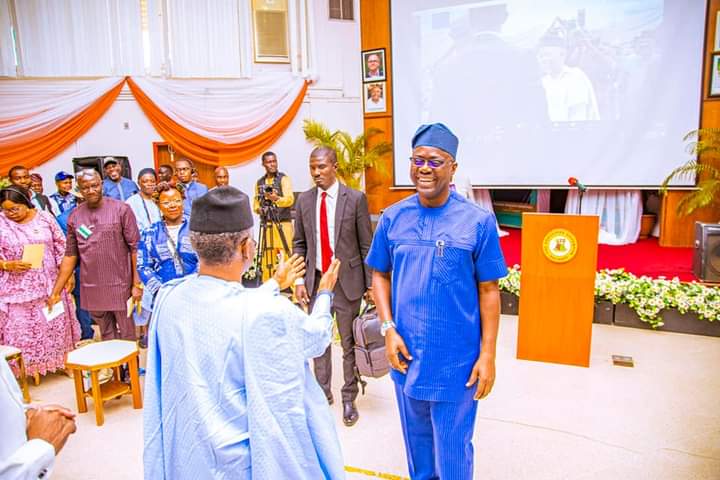 Oyo State Governor, ‘Seyi Makinde, on Friday, described the outgoing Director-General of the International Institute for Tropical Agriculture (IITA), Dr. Nteranya Sanginga, as an uncommon leader whose leadership style helped to turn things around for good at the Institute.

The governor stated this while speaking at the commemoration and send-off ceremony organised for the outgoing IITA Director-General, held at the IITA Conference Centre, Moniya, Ibadan, adding that he showed a remarkably uncommon focus and leadership in his 11 years as head of the Institute.

A statement by the Chief Press Secretary to the governor, Mr. Taiwo Adisa, quoted the governor as stating that the way Dr. Sanginga turned around the fortunes of IITA “is a testament to the fact that Nigeria can grow from poverty to prosperity through agriculture and agribusiness.”

According to Makinde, IITA, under Sanginga, thrived and went from being in debt to operating profitably.
The governor maintained that it was exciting to have worked with IITA on several projects in line with his administration’s vision to expand the state’s economy through agribusiness and to encourage young residents to exploit the opportunities in agribusiness.
Similarly, the governor of Kaduna State, Mallam Nasir el-Rufai, felicitated the outgoing Director-General of IITA, Dr. Sanginga, saying that he is a blessing to Nigeria.

Governor el-Rufai equally lauded Governor Makinde for providing good governance to the people of Oyo State.
Makinde said: “I would like to say that Dr. Nteranya Sanginga is a courageous man; the things he has done, and the decisions he took that led up to this moment show great courage. Because of that courage, he has shown remarkable and uncommon focus and leadership. This is what they have all been saying here.

“I know some of his story of coming here; meeting with his twin brother and how they went through different paths to where they are today. So, it is easy to celebrate great men when they are at the top but the decisions they took, which brought them to the present situation, are the subject of this study.

“I am quite happy that the biography of Dr. Sanginga will be launched today; it is a key that can be kept for posterity. Your uncommon focus and leadership turned things around in the IITA. That is not all.
“I have listened and checked through the records and I saw that you are the first African given this opportunity to lead IITA, and we all know that when an African is given a chance to lead an agency and corporation, the next thing you hear is that the place has run into bankruptcy.

“But, IITA under Dr. Sanginga, thrived and this institution has gone from being in debt when you took over, to operating profitably. I thank you so much for all the hard work. The story of how you were able to turn around the fortunes of IITA is a testament to the fact that Nigeria can grow from poverty to prosperity through agriculture and agribusiness.”

Governor Makinde added that as part of the testimonies to Dr. Sanginga’s great leadership, he [Makinde] had brought PDP governors to IITA where the outgoing IITA boss addressed them about the opportunities that exist in agribusiness and that today, most of the governings “are now focusing on agribusiness based on the few things Dr Sangiga told the gathering then.”

“There are so many lessons to learn from this great man because of his brilliance, passion and leadership style. We have worked together on several projects and I have no fears or worries about letting IITA lead projects such as the STEP.
“He asked me to come down to Fasola and I saw the pictures of ‘before and after’ and the students fried chin-chin, baked cake, which got me thinking that I used to have the same opportunity at Bishop Philips Academy but we lost it along the line.

“This is the electioneering period, and I want to use this opportunity to tell the people of Oyo State that if I am given another opportunity to serve, we will take the Start Them Early Programme to more schools in the state.

“The idea of training our young people in agribusiness resulted from seeing what is possible here. Now, Oyo State has trained over 3,000 youths in a technology-driven, agri-food system and we are currently providing them with enterprise support. I will give all the credit to my good brother, Dr. Sanginga
“Finally, let me say this: if Dr. Sanginga had not kept IITA up and running when he took over this place, we would not have seen a model after which we would convert our moribund farm estates into agribusiness industrial hubs. We have one nearly completed at Fasola in Oyo West.

“IITA also supported us in the wake of COVID-19 that ravaged the whole nation by making their laboratories available for us. IITA stood with us; when we went out to provide farm inputs for farmers, they were side-by-side with us.

“We are really grateful for your courage, perseverance, and tenacity. You have touched our lives in many ways and you are not going anywhere, as you will still be useful to us in Oyo State. Your name is written in gold, not at the gate of IITA or the Governor’s Office but in our hearts, and we will remain grateful to you,” the governor said.