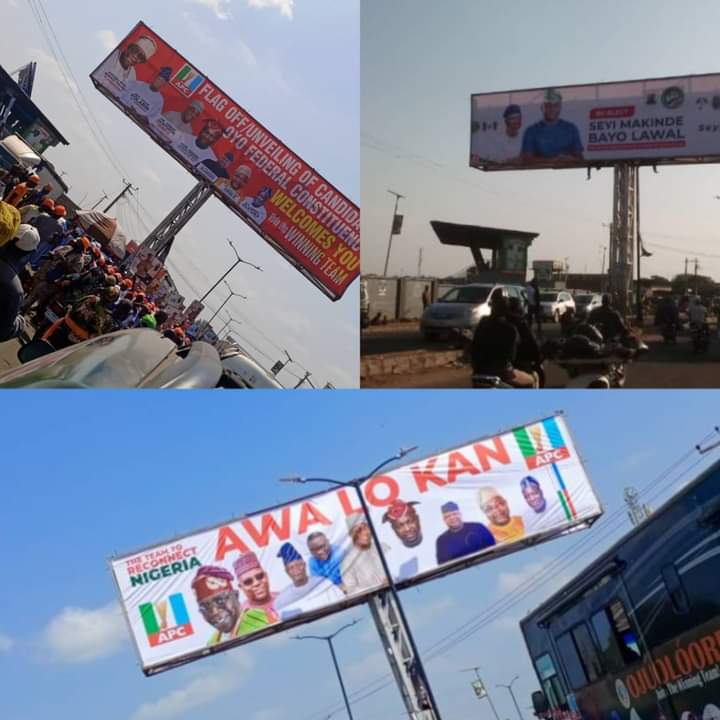 The Oyo State People’s Democratic Party (PDP) has raised the alarm over what it called unwarranted deliberate provocation by the state chapter of the All Progressives Congress (APC).

The ruling party in the state alleged that Oyo state APC has removed the party’s banners billboard at Owode/Akesan road in front of Oyo Central Mosque, Oyo.

Akeem Olatunji, the Oyo state PDP Publicity Secretary, who made this known today alleged the opposition’s governorship candidate in the 2023 elections, Senator Teslim Folarin and Honourable Akeem Adeyemi as the brain behind the illegality.

The Oyo PDP Spokesperson maintained that the ruling party had secured the billboard space for a period of six months which is to remain valid between 27th October, 2022 to 27th April, 2023.

Olatunji stated that the contractor who owns the billboard space, Edge Plus Media, confirmed to the party when contacted that the matter is being reported already at Durbar Police Station, Oyo.

The ruling party however, called on the State Commissioner of Police, CP Adebowale Williams, to immediately wade into the matter before the ruling party is forced to redeem its legitimate billboard space by personal means.

While stating that APC in the state does not have monopoly of violence thinking it has federal backings, Oyo State PDP warned the opposition party not to confuse its civil and decorous disposition to politics as being entrenched by Governor Seyi Makinde who is the overall leader of the party in the state and South Western Nigeria, to mean weakness.

“We are very much aware of the grand plan by the Oyo state chapter of the APC to not only instigate unwarranted violence to further advance its campaign of calumny and political blackmail against our government, we are also fully aware of their plan to provoke PDP into retaliation against their dastardly acts of illegality in the state as 2023 fast approaches.

“Senator Teslim Folarin and his fellow national assembly colleague from Oyo zone, Honourable Akeem Adeyemi otherwise called Skimeh are both the brains behind this illegality.

“As a political party, we know exactly how to adequately respond to such unwarranted provocation but we will not allow them force our hands into such face-off which is exactly what their grand plan is, in order to be able to advance their failed governorship campaign project.

“Every single person who has lived or stayed in Oyo state within the last three and half years or those who have intermittently visited the state can attest to the unprecedented transformation in every nooks and crannies of the state under the leadership of Governor Makinde.

“We’re aware that they’ve have concluded in their camps that based on the sterling performance of our government as duly and acknowledged and attested to by some of APC governors who have visited the state, it is impossible to campaign against Governor Makinde on account of performance and have therefore, resorted to campaign of calumny and political blackmail.

“While we await the outcome of the report made by the billboard space owner, Edge Plus Media, at Durbar Police Station, Oyo, as well as the prompt intervention of the State Commissioner of Police, CP Adebowale Williams to address this illegality and brazen show of lawlessness capable of creating public disturbance by people expected to be lawmakers, we warn these agents of distabilization to desist forthwith from the path of political perdition.

“We want to make it abundantly clear that APC in Oyo state and its agents of violence as led by its arrowhead himself, Senator Folarin must desist from the path it is taking ahead of the political campaign season if truly the opposition party and its guber candidate have no ulterior motive to burn down the state in violence to enable the opposition succeed in its fictitious, wicked, and demonic campaign against the mandate of the good people of the state.” Olatunji stated.