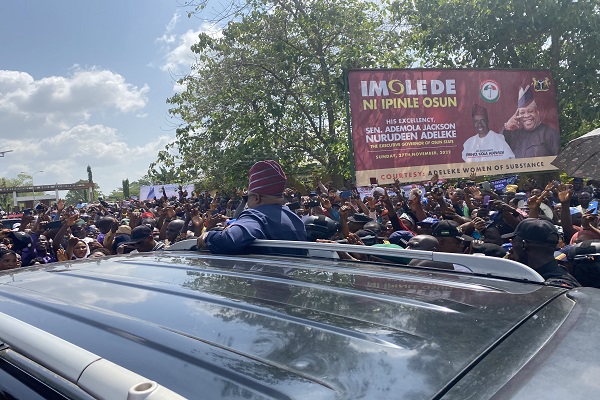 Civil servants, members of the Peoples Democratic Party (PDP) and residents of the Osun State on Monday welcomed the new Governor Ademola Adeleke into office with excitement.

The elated crowd converged on the frontage of Abere around 8 am with flags, banners, drums, trumpets and whistles waiting to welcome the new governor

Adeleke arrived at the gate of the State Secretariat by 12: 22 pm amid heavy security to a rousing welcome.

Osun Governor acknowledged the cheers by sticking out his head through the open roof of his vehicle as the convoy moved into Bola Ige House.

The Governor was hosted to an inter-faith service today at State Secretariat Osogbo with hundreds of civil servants jubilantly singing and dancing for the new State Executive.

Adeleke promised a government that is favourable to the public service.

According to the Governor, his administration will take workers’ welfare seriously, pointing to the first item on his five-point agenda as the worker’s interest and conditions of service.

Speaking at the swearing-in ceremony for the Chief of Staff, Alhaji Kazeem Akinleye and the Secretary to the State Government, Hon Teslim Igbalaye, Adeleke described the new appointees as “worthy sons of Osun State” and strong members of the ‘Imole team’ with the best interest of the State at heart.