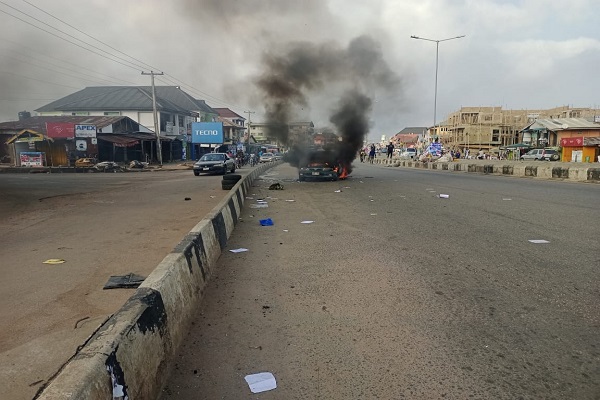 Hoodlums armed with guns and other dangerous weapons have attacked motor parks in Osogbo, capital of Osun State, creating tension barely 24 hours after Governor Ademola Adeleke was sworn in.

Source gathered that the hoodlums, claiming to be supporters of the ruling Peoples Democratic Party(PDP) launched attacks on four motor parks in Oke-Baale, Old-Garage, Ilesa Garage and Aregbe Garage simultaneously.

The hoodlums claimed the union leaders were loyal to the All Progressives Congress(APC) and must give way to loyalists of the new administration.

Ten members and executives of the National Union of Road Transport Workers(NURTW) sustained injuries while two policemen sustained bullet injuries when the parks were attacked on Sunday.

The attacks continued on Monday with sporadic gunfires at the parks as the hoodlums attempted to take control of the union’s secretariat.

At Old Garage, hoodlums chased union members from the park towards Ayetoro area with guns and cutlasses leading to business owners closing their shops. School gates were hurriedly closed too with a car razed.

Adeleke, in a statement by his spokesperson, Olawale Rasheed, directed union leaders to maintain peace across parks, warning against violence.

“All union leaders and their supporters are hereby directed to remain calm and bring any grievances to the State Government for resolution. Security agencies are consequently directly to maintain law and order,” the Governor stated.