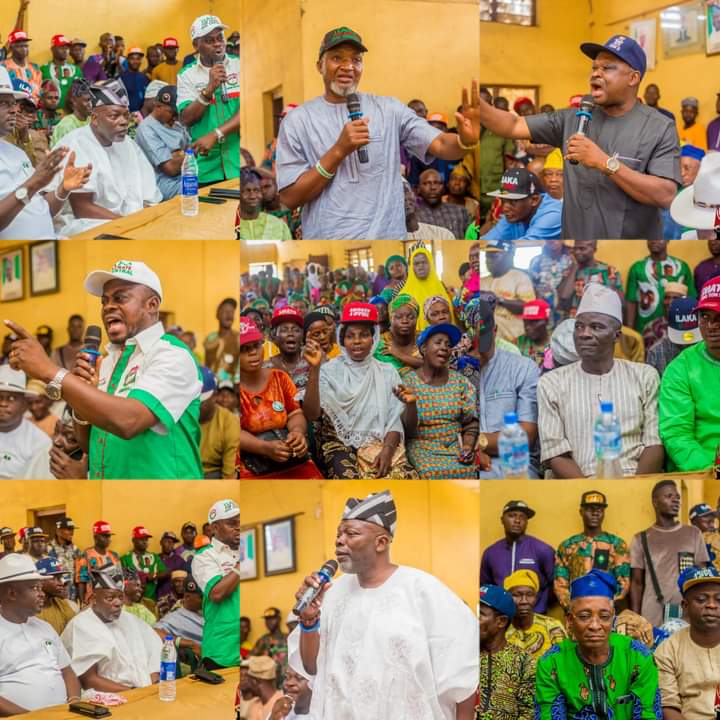 The Ogo-oluwa local government chapter of People’s Democratic Party (PDP) have reiterated their support for the Party’s Senatorial Candidate for Oyo Central Chief Luqman Oyebisi Ilaka, promising to work assiduously for his emergence as the Senator representing Oyo Central.

While hosting Ilaka at the Party’s general meeting held yesterday at Ajaawa town hall, Baba Gideon Oyeleye, PDP chairman in Ogooluwa local government noted that 2023 election in Ogooluwa will no longer be business as usual for APC, he further stated that PDP campaign messages will be based on the developmental strides of his excellency, Engr Seyi Makinde. He stressed that it is important to vote a man with a milk of human kindness as Senator representing Oyo Central, he described Chief Luqman Oyebisi Ilaka as such a man and also indicated that other PDP candidates in Ogo-oluwa/Surulere federal constituency will receive massive support from Party members.

Oyeleye added that “We will deliver massively for Ilaka, the Ladilu of Oyo, our district lack better and quality representation, we as a party have resolved to mobilise across the polling units and wards to actualise the long awaited dream of Chief Luqman Oyebisi Ilaka because we believe he is fully prepared for the representation we deserve” .

Earlier, his welcome address at the meeting, the executive chairman of Ogo-oluwa local government area Hon. Oluwaseun Ojo appreciated Party members and stakeholders for the large turn out at the general meeting, while pointing out that PDP in the council area is one and united, he added that Chief Luqman Oyebisi Ilaka who was the former Chief of Staff to governor Seyi Makinde remains the candidate to beat in Ogo-oluwa and its environs.

The council boss further urged Party members and electorates to collect their Permanent Voter’s Card (PVC) as well as intensify more efforts on house to house, units to units campaign, adding that PDP has giving renewed hope to the masses in Oyo state through Engr Seyi Makinde laudable achievements in the state, He gave assurances that Ilaka and other PDP candidates will emerge victorious in Ogooluwa local government area.

The executive chairman of Egbeda LG, who doubles as ALGON chairman in the state, Hon. Sikiru Sanda appreciated the massive turn out of Party members in Ogo-oluwa for the meeting, while stating that there are only two Parties in Oyo state, PDP and others. In 2023 PDP will take over across all levels he stated.

Hon. Kazeem Gbadamosi the executive Chairman of Lagelu local government in his remarks urged Party faithfuls to be watchful in the coming elections. he noted that Ilaka is a recognised name, his philanthropic gestures cut across all levels, he added that the present occupant of Oyo central senatorial seat has not brought value to Oyo Central, but setback to the district. He charged Party members to mobilise the people to come out in their numbers to vote for Chief Bisi Ilaka and other PDP candidates. He requested Party stakeholders in Ogooluwa to intensity efforts in unifying the Party.

Equally, the Ogooluwa state assembly member Hon. Ogundare Abideen and Surulere/Ogooluwa federal house of representatives candidate, Hon Sunday Makanjuola (SMATO) solicits for cooperation of all stakeholders and members of the Party so as to ensure victory at the polls. The duo further assured members of the dividends of democracy after a successful outing at the polls.

In his Remarks, the Oyo born lawyer turned Politician, Chief Luqman Oyebisi Ilaka charged the Party faithfuls to work tirelessly in their various clans, communities, units, wards to ensure total victory for him and all PDP candidates in the forthcoming elections.

He urged all members to take the first election seriously, and also impress on the people to vote PDP candidates across board and avoid violence by all means. He called on members not to relent in their campaign messages, adding that there are some electorates who need one or two words to convince them on why its important to vote PDP across board. “Make sure you avoid mismatch of candidates, don’t fall for their thuggery and destruction, vote PDP in all ballots, once you vote us in power, we will do our best to meet your expectations in all essential facet of human life and development.