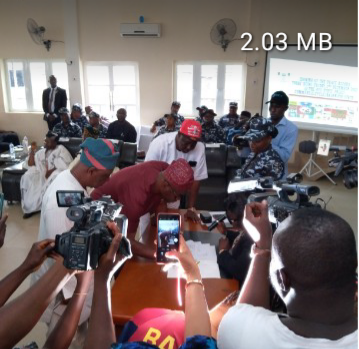 Some candidates of various political parties participating in the 2023 governorship election in Oyo State including the incumbent governor, Seyi Makinde of the Peoples Democratic Party (PDP), Bayo Adelabu of Accord, Popoola Josiah of New Nigeria People’s Party (NNPP), have signed a peace pact towards a violence-free 2023 elections.

The ceremony held at the Police Headquarters, Oyo State Command, on Friday, at the instance of the election Peace Accord Committee, which wad chaired by former governor of the state and the Otun Olubadan of Ibadanland, High Chief Rasheed Adewolu Ladoja.

The candidate of the All Progressives Congress, APC, Senator Teslim Folarin was absent from the event but his deputy governorship candidate, Okunlola Oluwafemi, was present to sign the peace accord.

The Oyo State Commissioner of Police, CP Adebowale Williams, in his address, noted that without peace there can not be an election, urging all candidates to maintain peaceful conducts and eschew behaviors capable of truncating the relative peace in the state.

He also maintained that signing of the peace accord marks the beginning of intera-gency security operation towards ensuring the attainment of peaceful, credible and transparent election in the state.

The candidates were urged to commit themselves to peaceful conducts before, during, and after the general election in compliance with the electoral Act as amended.

According to the signed undertaken contained in the peace accord, political candidates who fail to fully comply by the provisions of the peace accord shall and conduct themselves in manner or manners that truncates the relative peace in the state before, during and after the general elections shall be duly prosecuted according to the provisions of the Electoral Act as amended.

Addressing journalists shortly after the ceremony, Governor Makinde of PDP expressed delight at the development calling it first of its kind in the state since the Abuja peace accord.

He added that the peace accord has once again reaffirmed that the people remain the employers of all holding various public offices.

In his remarks, Adelabu told journalists that the peace accord is a laudable development that will not only guide politicians before, during, and after the election but will also create confidence in the outcome of the election process.

Others who spoke to journalists expressed confidence and optimism that the peace accord will foster a more civil disposition by candidates and their party supporters towards peaceful conduct during and after the election.