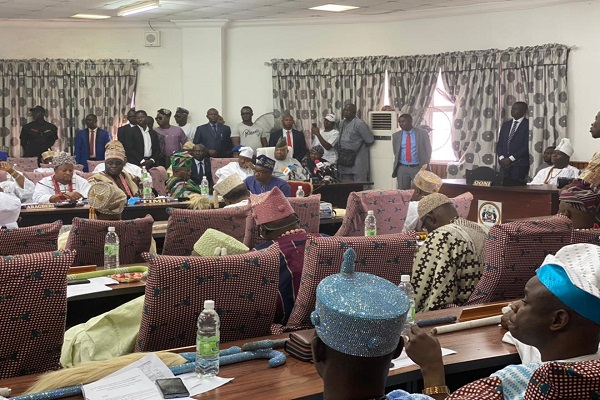 Adeleke said this on Thursday during a meeting with Osun State Traditional Rulers at Osogbo, Osun State Capital, where he also confirmed that the state is indebted to the tune of N407.32 billion as of November 30th, 2022.

According to Adeleke, “my administration inherited eight outstanding loan facilities, apart from salaries and pension debts, from Governor Oyetola’s administration.

“My good people of Osun state, the total loan stock as of today is N331.32 Billion.

“If the N76 billion debt on salaries and pension are added, the state is indebted to the tune of N407.32 billion. The amount owed to contractors is yet to be determined.

“The only fund in government coffers, as of Monday 29th November, was for November 2022 Salary. Otherwise, the state treasury was empty.

“As your governor, I will ask questions on your behalf. And will demand answers,” Adeleke told the traditional rulers.

He added, “Governor Oyetola must explain how the N331 Billion borrowed in the name of Osun State was expended, with no obvious infrastructural development to justify this huge debt.

“Governor Oyetola must explain how the N18 Billion Bridge Loan taken after he lost the election on July 16, 2022, was expended.

“The creditors, especially the Commercial Banks must explain why various loans were given to an administration beyond its 4-year tenure. 28 years is equivalent to the tenure of at least four governors. A child that is born today would have earned a Ph.D. at 28 years of age. This is nothing but mortgaging the future of Osun State with nothing to show for it. This is definitely not acceptable.”