Nobody Has Monopoly Of Violence, Concerned Authorities Must Call BUNVIC To Order Over Billboard Obstruction –Ilaka Media Org 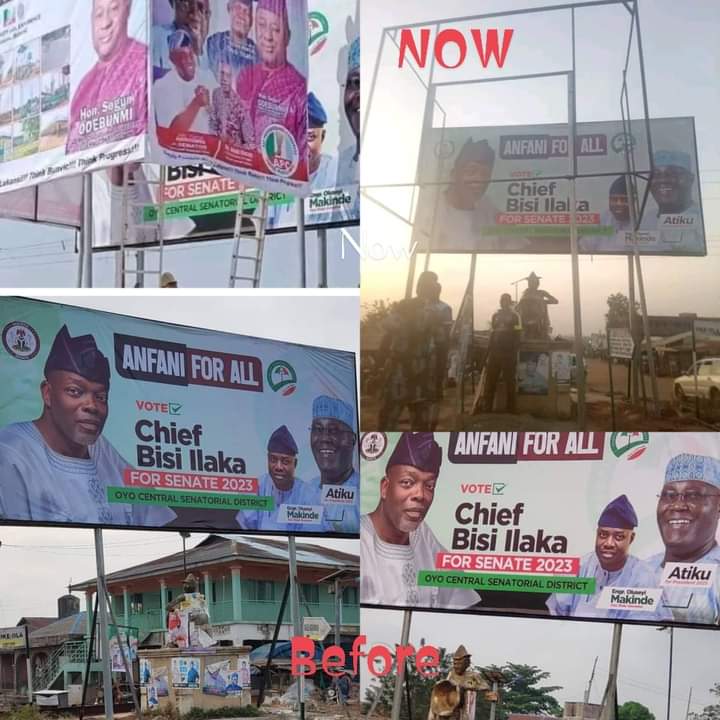 The Oyo Central Senatorial Candidate on the platform of the Peoples Democratic Party (PDP), Chief Lukman Oyebisi Ilaka, has raised the alarm over what was described as deliberate blockage and obstruction of his campaign billboard.

Ilaka’s campaign organization in a press release today Friday 16, December by its media Director, Omolere Omoetan, made this known to newsmen in the state, calling on all concerned authorities to urgently call Honourable Segun Odebunmi popularly called BONVIC to order before the matter is allowed to degenerates in the federal constituency.

Billboard of the former Chief of Staff to Governor Seyi Makinde according to Ilaka’s campaign organization was duly erected at the centre of Oko Roundabout in Surulere local government area of Ogbomoso after necessary approvals have been secured from concerned authorities.

Hon. Odebunmi (BONVIC), seeing the strategic positioning of PDP candidate’s billboard compared to his own which was erected near the same Roundabout, became infuriated and ordered his APC thugs to erected another billboard in front of Ilaka’s and completely created obstruction to Ilaka’s banner thereby, defeating the primary purpose of getting necessary approvals for the erection of Ilaka’s billboard at the said location.

Ilaka’s campaign media Director, Omolere, who confirmed the development said the matter has been officially reported to the police in the area as well as other concerned authorities in the state. He added that Chief Bisi Ilaka is daily losing value for monies paid to secure necessary approvals for the billboard erection.

Ilaka’s campaign organization expressed its displeasure with rude shock at the conduct and behavior of BONVIC and his APC thugs to without decorum and civil disposition to political campaign, carry out such provocative action capable of degenerating into a full blown political crisis in the area.

The campaign organization therefore, called on the Oyo state Commissioner of Police, CP Adebowale Williams, Commissioner for Local Government and Chieftaincy Matters, Barrister Olasunkanmi Olaleye, the Chairman, Oyo State Signage and Advertising Agency, and the Ogbomoso Police Area Commander to quickly wade into the matter to ensure BONVIC’s billboard Is immediately removed from where it is completely obstructing Ilaka’s billboard.

Ilaka campaign organization also, reiterated that nobody has monopoly of violence to live under the illusion that he or she could recklessly provoke other political candidates in the coming election especially as political activities continue to heighten up stressing that any attempt to violate the peace accord which was signed by all candidates at the instance of the Ogbomoso Police Area Commander, would be fiercely resisted by the PDP as well as Ilaka’s campaign organization in Oyo Central Senatorial district.

“We are greatly alarmed and disturbed by the incessant, deliberate, and provocative actions by candidates of the APC in Oyo state especially in Oyo and Ogbomoso zones under Oyo Central senatorial district. Their actions in recent times which we have repeatedly raised alarm over, are nothing short of direct invitation to violence aimed at fueling it’s campaign of calumny and sheer blackmail on account of maliciously created public unrest by the opposition party in the state.

“The other time it was a joint evil ploy and machination by Hon. Adeyemi also known as Skimeh and Oyo APC governorship candidate for 2023 election, Senator Teslim Folarin who’s thugs brazenly and disrespectfully removed Governor Seyi Makinde’s campaing banner from the billboard and replaced same with Bola Tinubu’s banner despite PDP securing necessary approvals for the billboard erection.

“Perhaps, because of how we in the PDP, particularly in Oyo Central Senatorial district have continued to conduct ourselves peacefully with utmost civil disposition to our political activities and conduct as well as respect for other political candidates and players by calling on concerned authorities to wade in and address situations each time they occur before they degenerate, our civility has been confused and mistaken for weakness.

“Let it be known to the entire world that you can not slap your fellow man in the face for no justifiable reason whatsoever, and expect a ‘thank you’ or he turned the other cheek for another slap, what the first slap has successfully done is a call for immediate retaliation. For this reason, we are again, appealing to the Oyo state Commissioner of Police, CP Adebowale Williams, as a peace loving political party and campaign organization of Chief Lukman Oyebisi Ilaka, that Hon. BONVIC be called to order and prevailed upon to immediately remove his billboard from where it is creating obstruction to Ilaka’s billboard at Oko Round-about, Surulere local government.

“Let it be abundantly clear to Mr BONVIC and APC in Surulere/Ogo-Oluwa federal constituency that election is neither war nor a do or die affair therefore, we remain on the side of peace and peaceful disposition towards our electioneering campaign ahead of 2023 but if the deliberate and unwarranted provocations by the APC candidates in the federal constituency and Senatorial district do not cease, then they must be duly reminded that nobody has the monopoly of violence.

“By this press statement we are alarting the whole world, appealing and calling on all concerned authorities including the Honourable Commissioner for Local Government and Chieftaincy Matters, Barrister Olasunkanmi Olaleye, the Oyo state Signage and Advertising Agency, and Ogbomoso Police Area Command to immediately address this matter before we’re forced to seek the avenue of self help to forestall this brazen reckless behavior which amounts to slap in the our face, and mindless lawlessness from a man expected to be a lawmaker for the federal republic of Nigeria.”