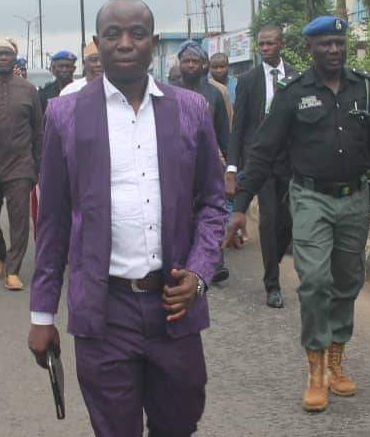 The fastest-growing online media, GOAL POACHER NEWS publisher, Mr. Kehinde Segun-Joel has stepped aside, just as the versatile broadcast and online journalist got Governor ‘Seyi Makinde’s nod to be appointed as a Senior Special Assistant Online Media to the office of the deputy governor, Barrister Adebayo Lawal.

Since his appointment has taken immediate effect, the ever-dynamic young talented journalist, had since handed the platform to professionals who will be running it to enable him concentrate on the task before him.

Until his appointment, Segun-Joel, whose journalism career has spanned years had worked in notable media organisations, which include Star FM, Thrill FM, Jamz FM, MITV, among others.

While expressing his appreciation, the elated Segun-Joel thanked Governor Seyi Makinde,  the deputy governor, Barrister Bayo Lawal for deeming it fit to honour him with the appointment, which according to him, was beyond his expectation.

“I wish to want to thank my father, the deputy governor, Barrister Bayo Lawal, his wife, Mrs Ajibola Lawal and their children for choosing me as his Senior Special Assistant for online. This appointment has given a new dimension to my journalism career.”

“I  specially appreciate the past and present management of JAMZ FM 100.1 that employed me and seconded me to the Governor’s Office as State House correspondent where God opened my eyes to other opportunities which led to the flouting of GOAL POACHER NEWS.COM on 5th April, 2020.

“JAMZ FM didn’t sack me despite different petitions, lies and innuendos peddled against me just for the station to get rid of me. God will always intervene and  the management will stand by me.

“I want to dedicate this new position to God Almighty, my family and all members of the press crew and I want to use this medium to reiterate that I will use this opportunity to discharge my duties diligently and be committed to the welfare of my colleagues who have been supporting me through thin and thick.”

GOAL POACHER NEWS is currently one of the widely rated online media in Ibadan, the Oyo State capital, as it always dishes its numerous online readers with unbiased up-to-date news, acurate current affairs and lots more.