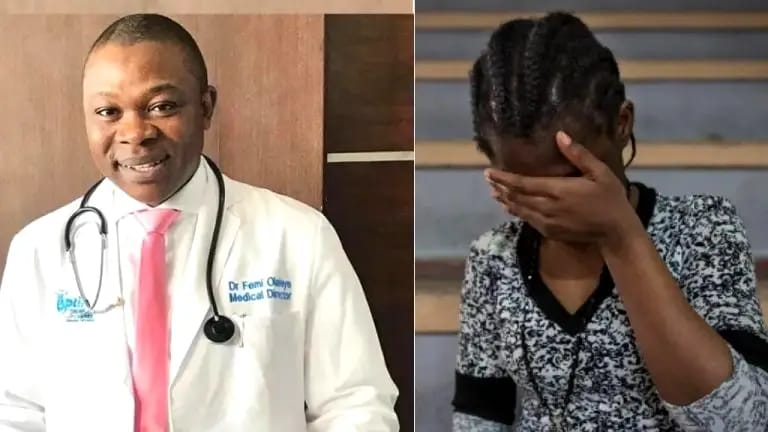 Nigerian doctor, Femi Olaleye’s wife who accused her husband of raping her niece, has told the court how he allegedly gave her sleeping pills in the night to sleep with her 16-year-old niece.

On Monday, Aderemi Faleye delivered a speech before the Sexual Offenses and Domestic Violence Court in Ikeja, Lagos State.

Olaleye is accused of sexual penetration and defiling a child on two counts.

The Lagos State government brought the managing director of the Optimal Cancer Care Foundation to trial on November 30, 2022.

To the accusation levelled against him, he entered a not-guilty plea. However, he was given a bail of N50m with two sureties in the same amount.

Olaleye was detained in Ikoyi prison while his bail requirements were being met.

The defendant and the witness had been married for eleven years. They are parents to two children – 10 and 7.

Mrs Olaleye said in court that her husband often gave her “junior aspirin” and Phenergan.

She said, “My lord, Femi, most nights, gives me a small tablet. When I looked at this incident, I wept. How was this incident going on in my home and I did not know?” she said.

“Femi gives me medication every night and he claims that it is junior aspirin that will avert blood clots because I’m turning 50 years old soon. My lord, maybe a medical examination should be conducted on me.

“I want to believe that I slept my way through all his atrocities. Sometimes, he also gives me Phenergan, he will say I work so hard that Phenergan will help me relax my nerves.”

The niece, came to live with the family in December 2019, when she was 15 years old after her guardian, who was also Mrs Olaleye’s mother, died.

According to the witness, her husband raped her niece from March 2020 to November 2021 at their Maryland residence in Lagos.

“Femi has been sexually abusing her. He introduced her to pornography and graduated to oral sex,” she said.

She also explained how during oral sex, he “released in her mouth.”