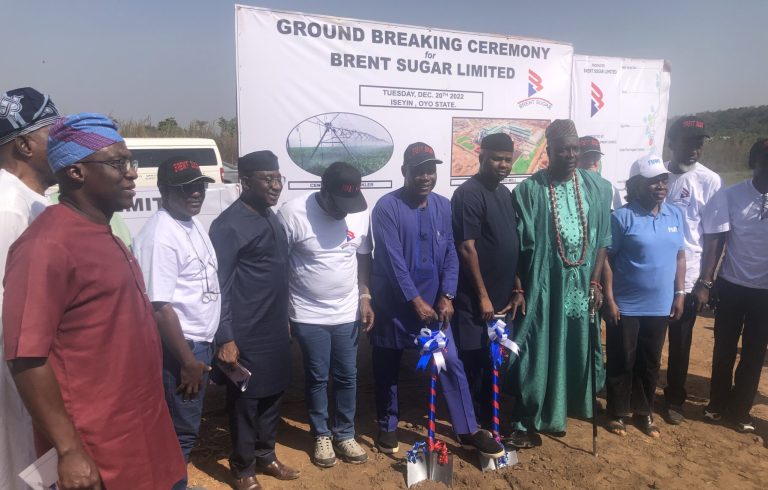 …. Farmers to earn nothing less than N3m in six months

The governor of Oyo state, ‘Seyi Makinde’ has flagged off Brent Sugar factory which is the second in the state located along Ogbomoso-Iseyin road in Oyo state.

Governor Makinde, who is fully committed to the development of the state through agriculture by ensuring that Oyo state is a major stakeholder in Brent Sugar Limited, assured citizens in a statement signed by the Senior Special Assistant to Oyo Deputy Governor, Oyedeji Ahmed, that his administration will continue to prioritize the safety and security of people’s lives and property while fostering an environment that allows businesses to flourish.

According to the statement, the ground breaking ceremony of Brent Sugar Limited Farm and Sugar Mill held in Iseyin LGA, Oyo state, is adjudged one of the biggest and functional Sugar Farms in Southwest Nigeria with total mass of 12,000 hectares (120sq km.)

It said the wholly indigenous company with business covering core sector of Nigeria economy is not only limited to Agriculture but Construction, Real Estate and Retail and has been involved in Agricultural industry for over 10 years in the Southwest.

Makinde, who was represented by his deputy, Barrister Adebayo Abdul-raheem Lawal, said that the Oyo state government has a vision and mission, highlighting the fact that one of its main campaign promises was to guarantee the development of the state’s infrastructure.

He asserted that Iseyin has developed into a modern town that will always be attractive to many industrialists, just as the Sobitol factory was also established in Iseyin as a result of the availability of virgin land in Oke-Ogun, stressing that the establishment of the company will also have a significant impact on the state’s economy.

According to Lawal, the CEO of Brent, Mr. Akinola is an industrialist, and the governor of Oyo State is a supporter of agricultural development, and as such, the government is determined to create an environment that will allow businesses to thrive by putting in place road network.

He emphasized the importance of infrastructure facilities, saying that the government has built the Oyo and Ibadan to Iseyin roads and is currently working on Alaga, which is very close to Ibarapa.

Lawal who appealed to the federal government to give the Okere dam proper attention now that it has been abandoned since 1983, submitted that it can be put to good use with this idea of a sugar factory.

He stated that the mission of the Oyo state government is interconnectivity in all of the zones in the state, noting that the road linking to the dam has been captured.

While commending Brent Sugar Limited for the lovely idea, he advised the community to provide adequate land that will be of good use for the project, asking them to cooperate with industrialists and developers so that everyone would benefit.

“By the time this company becomes fully operational and it accommodated about 10,000 youths, just few people would be seen roaming about or looking for job.

“On behalf of Oyo state and community of Iseyin, we assure Brent Sugar Limited of maximum cooperation,” he said.

The deputy governor added that Governor Makinde is putting all of his attention on Oke-ogun because of its potential, and that numerous construction projects will follow as Iseyin now a university town.

Akinola hinted that the establishment of the company would also lead to Co-generation capacity of 30 mega watt of electricity using BAGAS and also create 300,000 liters of ethanol in addition to 600,000 capacity from cassava from Brent farms.

While revealing that 10,000 cattle will be fed annually using Molars-is as a source of feed, he emphasized that approximately 10,000 people will be employed as well as providing work for approximately 6,000 farmers who he said would be able to earn close to N3,000,000 within six months.

He added that part of social responsibility from Brent Sugar Limited to the Iseyin Community is building a model school and providing scholarship to indigent students.

Akinola appealed to Oyo state government to further construct roads within the state to ease transportation of goods as well as pleading with the community to provide adequate lands for the establishment.

However, in his remarks, the National Sugar Development Council Executive Secretary, Mr Zaxheous said that development has no political coloutation, saying that the initiative will take people out of poverty.

“Sugar is always taking to where there’s need for development. Sugar is energy. Energy as a food; and Sugar is power”.

“Sugar will not grow in all ground but Iseyin is one of the places with good land facility to supply all the sugar needed in Nigeria.”

Zacheus welcomed the dedication of the Oyo state government and the presence of the Oyo deputy governor, who announced that the sugar council would be opened, create jobs, and open up additional prospects for the residents of Iseyin and the entire Oyo state.