Hon. Salami Dikko Salutes Makinde At 55, Describes him as a Compassionate, Passionate and People’s Governor 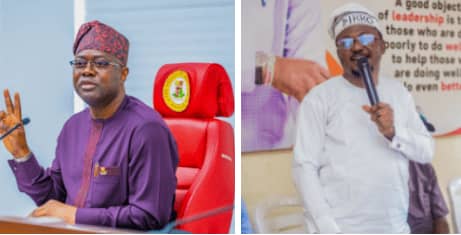 In a statement signed by Moyosoreoluwa Olamilekan Eldreez (Ijoba Authority Moe), Chairman Media, Publicity and Communication, Head (Youth Media Committee) to the office of Youth Mobilisation Director General, made available to newsmen, Dikko described Governor Makinde as a purposeful, dedicated leader per excellence and of impeccable character who is passionate in his quest for the growth and development of the state by providing massive infrastructure and basic amenities needs for the good people of Oyo state.

The statement further noted that Dikko enjoined Governor Makinde who is celebrating 55th birthday to continue his good works in giving the dividends of democracy to both the indigenes and non indigenes of the state, as he will surely reap his rewards.

He prayed that the second term bid (Omituntun 2.0) of Governor Makinde will be fulfilled by the special grace of the Almighty.

Finally, the director of Youth Mobilisation to Governor Makinde, wished his Excellency long life in prosperity and equally charged all the youths in the state to get their permanent voters cards (PVC) ready to vote for Makinde again come 11th March 2023 governorship election for sustainable development as well other PDP Candidates he said.