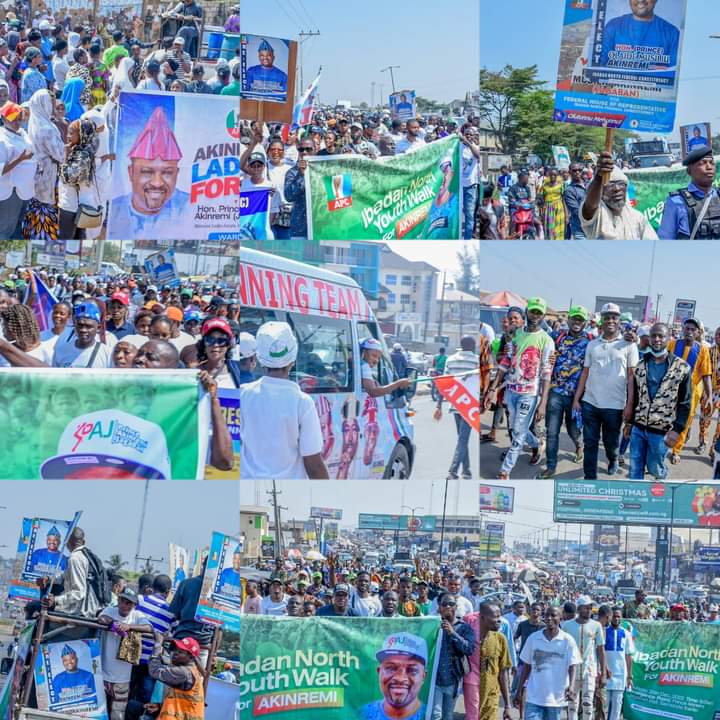 Youths from different groups and associations across Ibadan North gathered earlier today to participate in a walk in honour and support of the House of Representatives member representing Ibadan North Federal Constituency, Hon. Prince Olaide Akinremi popularly known as Jagaban.

This assembly of youths noted that they deemed it necessary to organize the walk in acknowledgement of the outstanding and phenomenal impacts Hon. Olaide Akinremi has had on the lives of youths in Ibadan North Federal Constituency till date, with employments and empowerments of thousands of youths so far.

While interacting with members of the public as they walked across Ibadan North, they asserted that a vote for Hon. Olaide Akinremi who is contesting under the platform of the All Progressives Congress (APC) to return to the House of Representatives is a vote for great performance, phenomenal impacts and continuity of excellent representation for Ibadan North Federal Constituency.

They noted that Hon. Olaide Akinremi’s exemplary performance remains the major boost and source of confidence for the APC in Ibadan North Local Government, as his achievements have dwarfed those of his predecessors, and also ranks highly among his colleagues at the current 9th Assembly of the House of Representatives.

These youths also availed the opportunity to solicit and canvass support for all other candidates of the APC in the 2023 general elections, assuring members of the public of inclusive governance and maximum dividends of democracy.

They explained that as much as they came out to show their appreciation and support for Hon. Olaide Akinremi’s re-election bid, they are also soliciting support and asking the public to vote for all candidates of the All Progressives Congress in all offices available, starting with Asiwaju Bola Ahmed Tinubu as President, Senator Teslim Folarin as Oyo State Governor, Barr. Sarafadeen Alli for Oyo South Senatorial seat, Hon. Mustapha Salawudeen for Ibadan North State Constituency 1, and Hon. Steve Adeyoju for Ibadan North State Constituency 2 positions respectively.