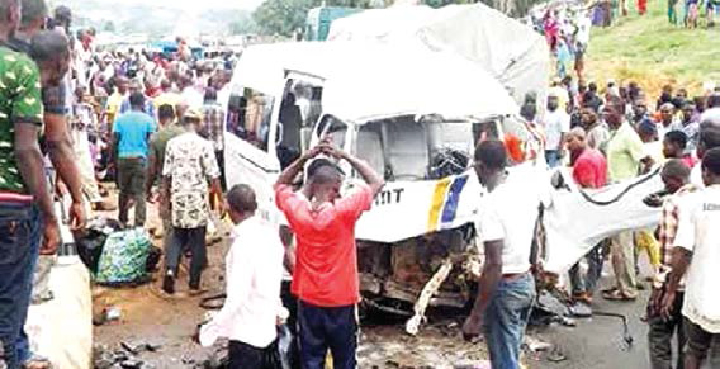 No fewer than seven persons were confirmed dead on Sunday while 16 others sustained injuries in an accident involving a Toyota Hiace bus and Mack tanker a few meters from Gofamaint on the Lagos-Ibadan expressway.

Umar said that the accident occurred at 4:10 pm and was caused by excessive speed on the part of the bus driver who lost control and rammed into the tanker from behind.

He added that 25 people were involved which comprised 17 male adults and eight female adults.

The FRSC boss explained that the injured victims were taken to Victory Hospital, Ogere for medical attention while the deceased were deposited at FOS Morgue, Ipara.

The sector commander advised motorists to shun speed, saying it kills faster than anything.

He also cautioned against driving while tired, saying “it is as dangerous as drunk driving”.

Umar called on drivers to always rest for 15 to 30 minutes after four hour journey.

The FRSC boss sympathised with the family of the victims and advised them to contact FRSC Ogunmakin office for more information about the crash.