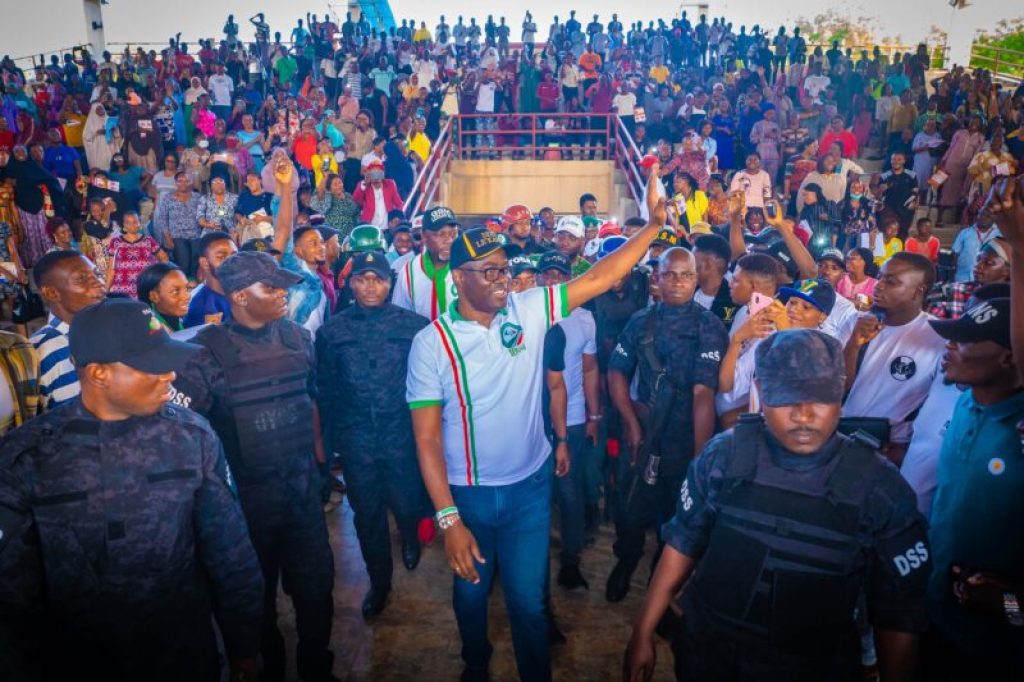 THERE’s a reason Nigerians are usually not enamoured of the political leadership, and it’s basically the decades of sad political records.

However, if and when they find the right candidates, they tend to show love even to the point of being charged with fanaticism.

And it is now the case with the talk-and-do governor of the Pacesetter State whom students, aluta-conscious and politically ecstatic, have baptized with a new title as a comrade in their struggle.

At a time officialdom faltered and dithered in paying the late Gani Fawehinmi his richly earned professional homage, students of the Obafemi Awolowo University damned the consequences and crowned him Senior Advocate of Masses, a novel title worth its weight in gold.

And a few days ago, it was students, yet again, who showed the nation how to honour an uncommon servant-leader, this time the governor of a state: they crowned Governor Seyi Makinde Nigeria’s first Deserving Authority, a position many would lobby without success to have, and damned the consequences!

The term is alien to Nigeria’s political lexicon, but the language has a uniquely phenomenal way of responding to change, and so we have a Deserving Authority loved to bits and serenaded by young and old on the campaign train, intent on leading the Pacesetter State to greater glory, making the joy of the people an article of faith.

Makinde was only going to Ogbomosho to rejoice with his beloved people and seek their support as he prepared to take Oyo State to the next stage, but the students had other ideas.

They staged a ‘Deserving Authority Walk’ held ahead of his campaign, telling everyone who cared to listen that they were prepared once again to elect the man fondly, and simply, referred to as Seyi.

Led by the president of the university’s Students Union, Adeboye Anuoluwa, the National Association of Nigerian Students (NANS), Zone D, NANS JCC Oyo State and the national council of the Federation of Ogbomoso Students’ Union, among others, the students lauded his remarkable achievements in the institution, appreciating him for securing the sole ownership of LAUTECH, the reduction of school fees in the institution and the cancellation of the ‘no fee, no examination,’ regime, among others.

They went from the LAUTECH Amphitheatre, through Under-G, Stadium and Orita Naira areas and berthed at the Oja’gbo venue of the Ogbomoso North and Ogbomoso South local governments rally for the governor’s re-election.

Who can blame the students? Time was when they were rendered idle for years, stymied by lacklustre leaders. Those were the Constituted Authority years. The school was a pariah and was already approaching the path of dissolution.

The owner states bickered and battled, putting staff and students in limbo. Lives were ruined but the then state governor, leaving substance to chase shadows, barraged protesting students with a lecture on his place as the Constituted Authority of Oyo State instead of addressing the salient questions about their school and their future, making himself the butt of jokes home and abroad.

But then Makinde came along in 2019 and promised not only to right the wrongs and return them to school but to make the school the exclusive property of Oyo State.

As the Commissioner for Local Government and Chieftaincy Affairs, Barrister Olasukanmi Olaleye, enthused: “In this zone, Governor Makinde is only contesting against himself, because there is no opposition. For example, in 2019 he promised that Oyo State was going to have sole ownership of LAUTECH and we have it here, and you know LAUTECH is tied to the economy of the Ogbomosho people.”

But Ogbomoso is only a mirror of Oyo State as a whole. Everywhere he moved on the campaign train this week, his records on agriculture, infrastructure, sports, rule of law and security of life and property spoke eloquently for him.

Yet the governor, speaking at various stops on the campaign trail and besieged by joyous crowds, declared that all the positive developments recorded so far were only the tip of the iceberg; Omituntun 2.0 would usher in greater exploits.

He spoke at Ahoro Dada, Olokoto, Tewure and Ikoyi-Ile and other areas. Hear him: “In 2019, I made some promises to you, among which I said I would take our people from poverty to prosperity under Omituntun 1.0. From Ogbomoso, it took us 20 minutes to get to Ahoro Dada and this is due to the Ogbomoso-Fapote-Iseyin Road, which this administration is constructing.

Now, our farmers can take our farm produce to the markets in urban centres. I also promised there would be one PHC in each ward and we have done this. I vowed to secure life and properties and you can all see what the Amotekun is doing. We have put in place a communication network for our security agencies.

All of these have been achieved under Omituntun 1.0. So, we want to upgrade to Omituntun 2.0.”Like in Ogbomoso, the mood when the campaign hit Igbo-Ora, where the governor was rewarded by His Royal Majesty, Oba Jimoh Olajide Titiloye Asoro-Olu Ayinla V, the Olu of Igbo-Ora, and the Forum of Ibarapa Traditional Obas and Chiefs with the title of Aare Atayese, was soul-lifting. Ibarapaland rose in honour of the Deserving Authority for his phenomenal first time of office

As the governor himself noted on his timeline, touching on the work yet to be done: “We held the state flag-off of campaigns today at Igbo-Ora. I thanked the good people of Ibarapaland for supporting our administration. I also talked about what they should expect in Omituntun 2.0.

“The most pressing issue raised was poor electricity supply. I assured them that we would set up a rural electrification board to find a lasting solution to the issue. I also said while rehabilitation work is ongoing on the 38km Igboora-Igangan-Iganna Road, work would commence on the 48km Ido-Eruwa Road in about two weeks.”

The campaign train moved to Surulere and Ogo-Oluwa Local Government areas on Wednesday, where the governor promised to prioritise the welfare of traditional rulers and also revive the Oko Fruit Processing Factory in order to create more jobs for the teeming youth of the axis, adding that he would solve the boundary issues with Kwara and Osun like he handled the LAUTECH crisis.

As Governor Makinde spoke at the different campaign stops at Iresa Adu, Iresa Apa, Oko, Odo Oba and Ajaawa communities of Surulere and Ogo-Oluwa local governments, Muslim and Christian leaders expressed their resolve to retain him in office.

He could not hide his excitement: “Judging from what I have experienced here today, you have shown to me that I am not a contestant but one who deserves continuity.” The governor also made campaign stops at Odo Oba and Ajaawa, where he equally rallied residents to support him so as to continue to move Oyo State people from poverty to prosperity. He will be fully backed by an appreciative populace. It is the people’s verdict.