Inside Alaafin of Oyo’s Deserted Palace 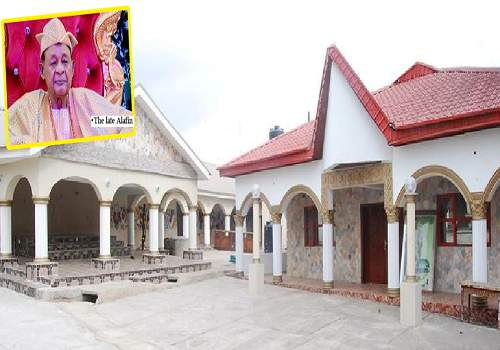 Until the Alaafin of Oyo, Oba Lamidi Adeyemi II, joined his ancestors while undergoing treatment at the Afe Babalola University Teaching Hospital, Ado-Ekiti, Ekiti State on April 23 last year, his palace was always a beehive of activities. But all that has ceased with the palace shut as the ancient city awaits the emergence of another Alaafin.
GBENGA ADERANTI looks at things that have changed in the monarch’s palace since he passed on

Before the longest reigning Alaafin of Oyo, Oba Adeyemi II, joined his ancestors in the early hours of April 23, 2022 at the age of 83, there was a daily routine in the palace that was never compromised. The monarch and other palace dwellers were woken up every morning by the melodious beat of the talking drum while praise singers were always on hand to sing his praises. It was the custom that even before he woke up in the morning, his palace would be filled with people who were there to seek one form of favour or the other.

While it is yet to clock one year since the late Alaafin departed, many of the palace routines that were taken for granted are no longer in existence. A source close to the palace told the reporter that not long after the monarch died, his belongings were moved out of the palace.

Indeed one of the widows of the late Alaafin said that all forms of activities in the palace had been suspended until a new Alaafin was appointed.

Asked what had become of the late Alaafin’s valuable items like his books and historical documents, the source said that plans were on to build a centre where the books and documents would be kept for research purposes. Some who are involved in the project described the transition of the Alaafin as a big blow that had caused a temporary setback.

Nonetheless, Sade, a daughter of the late Alaafin, expressed optimism that the project would soon come to fruition. “Rome was not built in a day. We are working on it and it will come to pass,” she said.

While the stream of visitors to the palace has dried up, the widows of the late Alaafin remain in their various homes that he built for them. A source in the palace said: “They are in the various houses that baba built for them before he passed on. They are also engaged in their various jobs. Thankfully, the majority of them were up and doing while Baba (Alaafin) was alive.”

An easily noticeable change in the palace’s outlook is the conspicuous absence of a man popularly known as Baba Kekere, whose height was always an object of attention. In spite of his petite look, he is believed to know more about the palace than any other person. Little wonder he is regarded by many as the palace’s repository of knowledge.

Baba Kekere was said to have been in the palace even before the ascension of the father of the late Oba Lamidi Adeyemi. For the small-built man whose age remains yet a matter of conjecture, things may not be the same until a new Alaafin is installed.

In a chat with the reporter, Sade, the eldest daughter of the late Alaafin, said: “The palace is on lockdown under the protection of Atiba Local Government. The Alaafin’s drummers are not in the palace. They are in their various homes awaiting the installation of a new Alaafin.

“The servants are also in their various homes save Baba Keji, the head of servants known as Baba Kudefu. The Secretary, security men, and two other officials all under Atiba Local Council report to the palace at normal working hours.

Until Oba Adeyemi joined his ancestors in April last year, he was the rallying point for all the monarchs in the state. Oyo monarchs were frequent in the palace for one meeting or the other. That, however, has changed.

One of the monarchs who spoke with the reporter said the death of the Alaafin has created a big vacuum in the state. He stated that many things have changed since Oba Adeyemi joined his ancestors.

Pleading anonymity because of what he called the current political situation in the state, the monarch said the government had been uncomfortable with him because of his political leaning.

According to him, the late Oba Adeyemi was not only a rallying point; he was also the voice of the traditional institution in the state.

He said: “If the Alaafin were alive, I would not have any reason to be afraid to express my views. They are closely watching me and monitoring my movements even when I travel, and I have been very careful.

“As it stands right now, traditional institutions have lost their voice, especially on matters affecting them. Nobody can champion our cause in the state right now. This is one of the things that have changed.

“I must be sincere, things have really changed. They are not taking the traditional institution the way they should take it.”

He recalled that when the late Oba Adeyemi was alive, he was promoting the traditional institution, but that had ceased since he passed on.

“Since he left, we have not had anybody to advocate for us. The conduct of some traditional rulers right now is appalling. They have forgotten the traditional institution and are pursuing something else.”

Although the responsibility of coordinating and directing the monarchs’ activities is that of the Oyo State Head of Local Government and Chieftaincy Matters, Oyo monarchs were also periodically meeting in the Alaafin’s palace.

Since the demise of the late Oba Adeyemi, however, they have been meeting in their various divisions “because each of the traditional rulers have heads in their own divisions. But I know for sure the Oyomesi and Oyo baales meet regularly,” a source said.

Right now, the Bashorun is said to have taken more responsibilities as the head of the Oyomesi.

Asked what life had been in the Alaafin’s absence, Sade said it has been very tough without his father.

She said: “It is a very hard question to answer. Honestly, on an emotional level, it has been extremely tough.

“In the area of opportunities, recognition and respect, it seems that Baba is still much alive. We his children really deeply appreciate the legacy he left behind. May his soul continue to rest well with his ancestors.”

The Nation also gathered that Paula Gomez, a Portuguese and Alaafin Ex-Cultural Ambassador is still in Oyo town. She has not been given another role. On the contrary, Alaafin’s Royal Ambassador, Aare Ayandotun Ayanlakin, says he remains the ambassador of the Alaafin. Until the demise of Oba Adeyemi, he was a popular face in the palace, representing the late monarch at events.

According to him, his radical nature attracted him to the Alaafin, and since they met about 35 years ago, they had been together until death separated them. Ayanlakin was probably the closest person to Alaafin outside his nuclear family.

Speaking to The Nation, he said he missed the late Alaafin deeply, adding that he was a good man who assisted him in all areas of his life. “He was a good man that would look at you straight, tell you the truth, and let you know where he was going.”

He opined that the late Oba Adeyemi’s exit had created a lot of vacuum that would be difficult to fill. The new Alaafin, he said, must have good education and sound knowledge of history.

Recalling his fond memories of the late Alaafin, Aare Ayanlakin described him as a father.

According to him, Oba Adeyemi did not look after him only but also after his children.

“I pray that God would give us someone like him again in Oyo,” he said.

Although there were times he had differences with the Alaafin, their disagreements, he said, were always quickly settled.

His meeting with the Alaafin, he recalled, was achieved through one of the chiefs in Oyo.

Ayanlakin said: “My grandfather was a drummer for the Alaafin. He would trek from his place every morning to drum for him.

“My father’s community, Akinmorin, was about one mile to Oyo. I was the Aremo of Akinmorin.”

Are Ayanlakin said Alaafin’s wife, Funmilayo Lawrence, was his classmate, and this really helped him in knowing the late Alaafin the more.

“She told me everything about Alaafin. I was so radical when I was young and the Alaafin liked me. He was the one that opened my palace here.

“He was surprised that I could do something this big. He was happy. He entered my bedroom and slept. He looked at the house and commended me for doing well.”